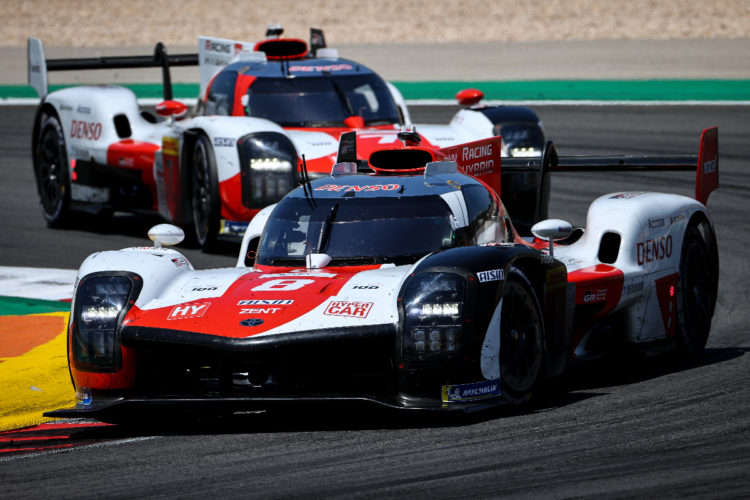 Toyota Gazoo Racing technical director Pascal Vasselon has explained why his team made the decision to let Jose Maria Lopez ahead in the closing stages of the Eight Hours of Portimao, only to let Sebastien Buemi back ahead a few laps later.

Buemi had been leading the eight-hour enduro in Portugal as the race went into the final hour when Toyota ordered him to swap positions with team-mate Lopez, who was running close behind.

The change subsequently took place and Lopez moved into the lead, but Buemi remained close after the swap and a few laps later, the team reversed the decision and Buemi was allowed back in front, ultimately going on to win the race.

The decision to swap in the closing stages of the race and then reversed the decision caused confusion among observers.

Vasselon told selected media in Portimao after the race that Lopez had initially been given the go-ahead to move into the lead because he was faster than Buemi, but that the team came back on the call when the Argentinean could not open up a significant enough gap to the sister car.

“We just looked at traffic free sectors, and during the first part of the stint, Jose Maria was faster, so he passed,” said Vasselon. “But then, unfortunately, he was not faster anymore when he had been in front, and we swapped back.

“This is a rule we have to make sure that the drivers accept to swap, because I know that if the car does not pull away, we swap.”

Toyota almost always controls position changes with its two cars to make sure both drivers are on the same page and to avoid unnecessary close contact between the two drivers on track, which could lead to damage or retirements.

The team then gives the driver out in front a number of laps to pull a gap, and if the pace out front turns out to be insufficient, the car that previously had been leading, will be allowed back in front.

A significant change that Toyota has made to this approach for the 2021 season, is that it no longer freezes positions when both cars have made their final pitstops.

This rule had been in place in previous years and has in the past led to some controversial situations, like the #7 car losing out on a Le Mans victory in 2019 when the car suffered a late delay due to a faulty tyre pressure sensor, but was not allowed to move back in front of the sister car, which went on to win the race.

Vasselon explained that Toyota had decided to abandon that rule for the current season after discussions with its drivers.

“So it was exactly the same, just shifted by one stop, which was in the end not making sense. So as we are constantly discussing and refining these rules with the drivers, they all preferred that the end of the race is the end of the race.

“Because when we were freezing at the last pitstop, there were situations, a bit difficult when the cars were not exactly in the same situation, and so on. In the end, it does not change much.”