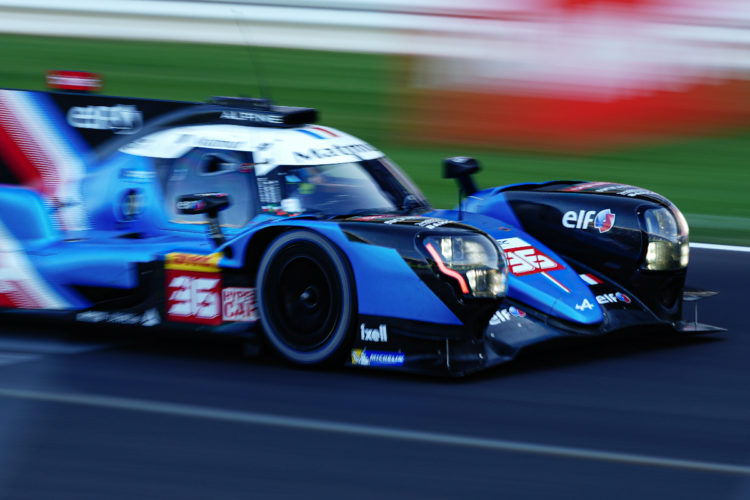 Nicolas Lapierre has taken an early lead in the Eight Hours of Portimao, while drama on the opening lap for the two JOTA cars saw them collide and shake up the LMP2 field.

Lapierre started the race from pole position in the #36 Alpine A480-Gibson, but has so far had little challenge from the pair of Toyotas. The #8 Toyota GR010 Hybrid sits second in the hands of Sebastien Buemi, while Jose Maria Lopez holds third in the #7 sister car.

Glickenhaus remains stuck in the LMP2 pack, with Richard Westbrook currently eleventh overall in the #709 007 LMH.

The running order at the top of the LMP2 field was shaken up by contact between the two JOTA cars on the opening lap.

Giedo van der Garde used the opportunity to jump into the lead in the #29 Racing Team Nederland ORECA 07-Gibson, with Robin Frijns moving into second in the #31 Team WRT ORECA. Da Costa has held on to third in class.

Positions in GTE Pro remain unchanged since the start of the race, as Kevin Estre leads in the #92 Porsche 911 RSR-19. James Calado is second in the #52 Ferrari 488 GTE Evo, with Gianmaria Bruni third in the #91 Porsche ahead of the #52 Ferrari of Daniel Serra.

After this, the #777 D’Station Racing Aston Martin Vantage AMR moved into the lead with Tomonobu Fujii behind the wheel, but the Japanese driver suffered puncture, forcing him to pit.