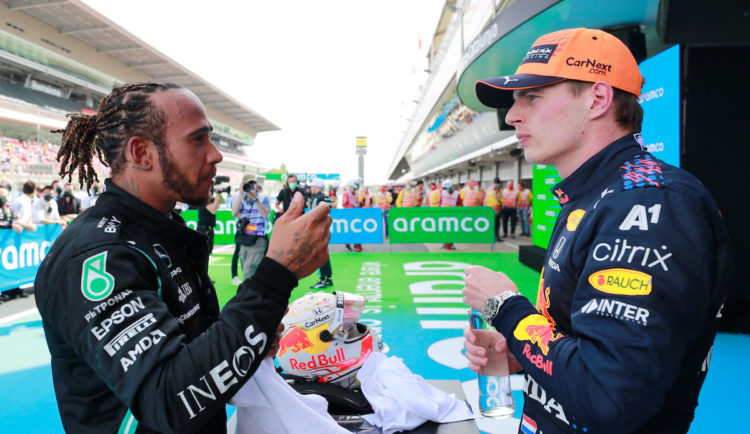 Former Formula 1 driver and 1999 season runner-up, Eddie Irvine, has shared his opinion on the 2021 championship fight and how he views title protagonists Max Verstappen and Lewis Hamilton.

Verstappen currently leads the championship for the first time in his career, but with just four points splitting him and Hamilton after six races, Formula 1 looks set for a thrilling season of on-and-off track battling.

Irvine says it’s been fantastic to watch two great drivers go head-to-head at every race so far and gave his opinion on who he thinks is the quickest.

“The 2021 season so far has been amazing,” Irvine told sports betting website Betway. “It’s been fantastic to watch those two guys go at it. I think it’s going to be a great season.

“Verstappen is definitely the fastest driver out there at the minute, but you have to say Lewis Hamilton is probably still the top driver.”

The British racer, who was Michael Schumacher’s team-mate for four seasons, believes Verstappen has a similar impact on his team-mates.

“Regarding Verstappen’s driving – finally after six seasons he’s definitely getting his act together,” added the 55-year-old. “He’s always been super-fast, and you can see that he’s by far the most dominant team leader on the grid.

“He’s had many, many different second drivers in the team and none of them have got close to him. So it’s a bit like the Michael Schumacher effect.

“While Lewis has been regularly out-qualified and outperformed by his team-mates, you’d have to say Verstappen is probably the ultimate talent, although Lewis is a consummate professional and has very few weak spots.”

Turning his attention to their team-mates, Sergio Perez and Valtteri Bottas, Irvine doesn’t believe being considered a “number two” as a negative, given the respective ability of Verstappen and Hamilton.

“Their jobs are to do the best they can do, that’s it,” he commented. “Bottas has beaten Hamilton before, more often than he has lately. Perez is new in there against Verstappen, but Verstappen has shown that the game is already over.

“They’re both de facto No. 2s, but I don’t think against two guys like Hamilton and Verstappen that’s a great negative. I don’t think anybody in Formula 1 would go up against those two guys and regularly beat them.

“I think Hamilton is getting older now and his pace isn’t as good as it used to be, but he’s still, as I said, a consummate professional. I think people know that anyone who goes against Verstappen is going to get beaten because of his pure speed.”