Vettel, Gasly podium proves ‘what could have been’ – Norris 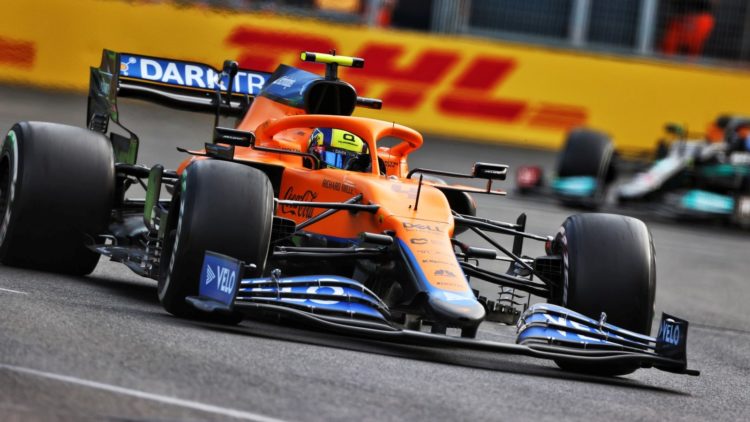 McLaren’s Lando Norris believes the result of the Azerbaijan Grand Prix showcases “what could have been” after midfield rivals claimed podium finishes.

The Briton qualified sixth at the Baku City Circuit but was demoted to ninth following a red-flag infraction during Saturday’s qualifying session.

His issues were compounded after a lacklustre opening lap in which he dropped to as low as 12th; however, Norris gradually recovered and benefited from problems elsewhere to emerge with a top five finish.

“Seeing Seb in P2 and Pierre, P3 give us a glimpse like that could have been us if we were in a better position. But we’ll take it,” said Norris.

“I did not have the best of the first few corners. I will review it, I lost out a few positions and that hurt us quite a bit for the rest of the race. Sometimes you can be a bit unlucky.

“[To] be in a position where you cannot go left or right, you go in the middle and you get sandwiched. Sometimes it does not go in your favour.

“But apart from that we made the most of every opportunity that we had from then on, with a strategy, with the pitstop getting ahead of Bottas and the restart at the end getting [Lewis] Hamilton and [Yuki] Tsunoda.

“I’m happy with P5. A good amount of points, a bit of damage limitation. So I was happy with it.”

Several drivers made mistakes through Turn 15 across the course of the weekend, with Max Verstappen and Charles Leclerc hitting the wall in qualifying, while Lance Stroll and Antonio Giovinazzi crashed out of qualifying.

Norris conceded that he almost joined the list during race trim.

“I had one quite hairy moment where a lot of people crashed,” he added. “I had quite a big lockup on the hard tire which scared me quite a bit because it was quite early in the stint.

“I had a lot of laps to go, I had a lot of vibrations, and was very easy then to start snatching that tire for the rest of the race.”