Quartararo felt like he was ‘skydiving’ with unzipped leathers 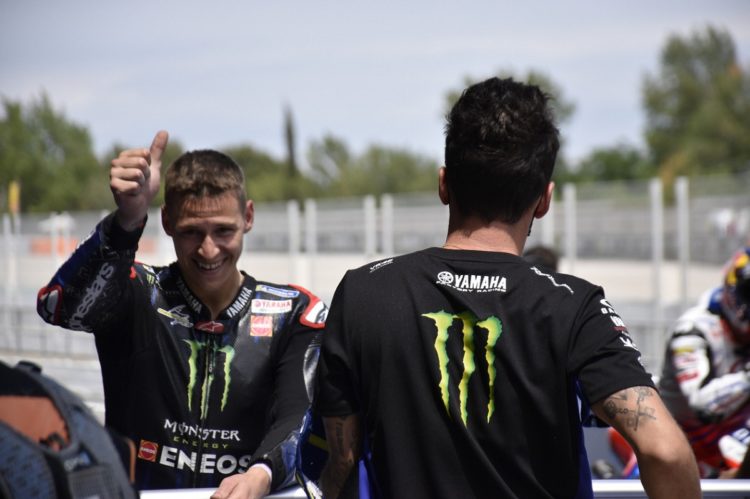 Fabio Quartararo says he is proud of how “I dealt with the emotion” of trying to finish the Catalan Grand Prix after his leathers came open in the closing stages.

The Yamaha rider fought Miguel Oliveira for victory at the Circuit de Barcelona Catalunya throughout the 24 lap encounter, briefly taking the lead at mid-distance before the KTM pilot re-took the leadership shortly afterwards on his way to his first success of the year.

Quartararo remained within touching distance of the Portuguese racer until the final five laps when his racing leathers unzipped themselves, his chest protector flying out onto the circuit as a result at the exit of Turn 3.

Having been unsuccessful in trying to zip them back up the Frenchman tried to get to the end of the race and preserve a rostrum result, but would ultimately lose out to a charging Johann Zarco before being dumped from the podium positions after finishing third on the road for cutting Turn 1 while battling the Pramac pilot and not ceding enough time.

He ultimately was classified sixth after getting another three second punishment for riding with his leathers unfastened and without his chest protector, an issue he explained made it feel like he was “skydiving” with the severe amount of wind encountered at such high speeds.

“We don’t how that was possible, I tried to zip it back up but I couldn’t and unsurprisingly it wasn’t very fun riding the last five laps but I think we did great and fought for the podium until the end with Jack (Miller),” said Quartararo.

“The zip was completely open and I tried to zip it back up, it felt like I was skydiving at the end of the straight and into the braking zones which made it really difficult for my neck and to stay in a normal position.

“That’s why I’m happy I could still fight with Jack and how I dealt with the emotion of what was happening, so I’ll take our result.

“It was a cool battle but in the end I got the penalty, I can’t see the lap time so there’s no way I could know I only dropped seven tenths and not second so I don’t really agree with the penalty but anyway I can be happy with today’s result and move onto the next one.”

Quartararo was expected prior to the race to stage a similar masterclass to the one he displayed en-route to victory in last weekends Italian GP at Mugello, though he says trouble with his rear tyre meant his feeling with his M1 was “not great”, accepting that victory would have “been difficult” even without the drama with his leathers.

“I struggled much more in the race with the rear tyre, I tried to attack Jack (Miller) in the opening laps and then I was fifth, but I made a really good comeback from fifth to first with our lack of top speed,” continued Quartararo.

“Even with the overtaking my feeling was not great with the bike, but none of the Yamaha’s had strong pace as I talked with Maverick (Vinales) and Valentino (Rossi) and they said the same as me so not the greatest feeling and then we know what happened with the leathers.

“I thought that Franco (Morbidelli) had the pace to win today, he looked similar to us, Valentino was slower and Maverick too.

“All the Yamaha’s struggled today, and I think even without the issue with the leathers first place was difficult.

“I would have tried for sure because I have nothing to lose at the moment because I’m not thinking about the championship and am just focussing on fighting for wins.

“Miguel (Oliveira) was very strong today and he made a good step from yesterday, so he deserved the victory.”

The series leaders eventual sixth place finishing position sees his championship advantage slashed from 24 points to 14 over Zarco-who recorded his fourth runners-up finish of the year in Barcelona- heading to Sachsenring for the German GP in two weeks time.