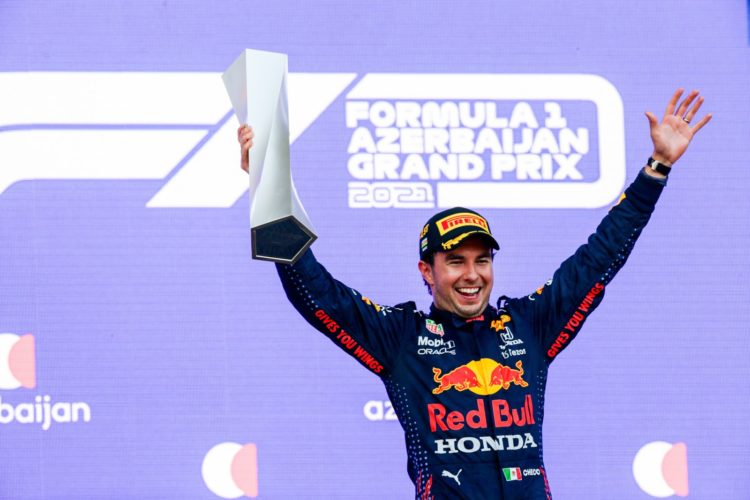 Perez joined Red Bull for 2021, in place of Alexander Albon, but had yet to score a podium with his new team prior to the sixth round of the campaign at the Baku City Circuit.

Perez started only sixth but rose to fourth on the opening lap, passed Ferrari’s Charles Leclerc on-track, before using the overcut to grab second from Mercedes’ Lewis Hamilton.

Perez was poised to classify second but inherited the lead in the closing stages when team-mate Max Verstappen crashed out due to a tyre failure, and converted his advantage across the two-lap restart period.

“We knew he was good around here, but we didn’t know he was that good,” said Horner.

“He’s been quick all weekend. He’s been bang on the pace, and the only mistake he made was in Q3 run one. His race pace was phenomenal.

“Had he not been longer in the first stop he would have been right on top of Max with the overcut, such was his pace in clean air. Phenomenal for him. The way he was defending from Lewis and controlling that was a class act.

“To see him get that victory will be great for his confidence. It puts him up to third in the Drivers’ Championship now. He’s ahead of expectations.”

Perez’s win came after worries on the Red Bull pit wall that his RB16B would not last the distance due to a hydraulics problem.

Horner confirmed that Perez had been “losing [hydraulic pressure] gradually during the second half of the race, so it was a particular concern at the restart.

“That’s why we started his engine up so late, just to try and put as little pressure on the system as we could. We were all relieved to see that car cross the line.”

It comes after Red Bull struggled to suitably replace Ricciardo, with Pierre Gasly and Albon unable to consistently deliver alongside Verstappen.

“It’s great to have both cars up there obviously,” said Horner. “I think it’s an added string to our bow on a day that you lose your lead car that Checo’s right there to deliver the win.

“That’s exactly what we’ve been looking for. I’m delighted for him and pleased for the team with all the amount of effort that’s been going on behind the scenes.”