Drivers ‘like lions out of the cage’ at late restart – Gasly 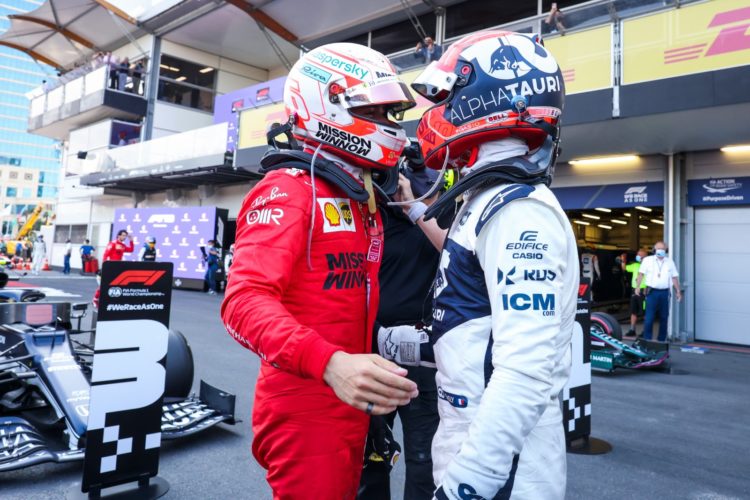 Pierre Gasly says drivers were “like lions out of the cage” at the end of the Azerbaijan Grand Prix due to the short dash to the chequered flag.

The race at the Baku City Circuit was red-flagged after 48 of 51 laps in the wake of Max Verstappen’s tyre failure along the main straight.

Race Control opted to restart the race and to do so with a standing restart.

With lap 49 in effect a formation lap, as drivers prepared to make their way to the new grid, the drivers lined up facing a two-lap sprint to the finish line.

Second-placed Lewis Hamilton went off at Turn 1, following a brake balance setting error, while Gasly prevailed in a fierce scrap for third with Charles Leclerc.

Fernando Alonso carved his way to sixth, Antonio Giovinazzi struck the rear of Daniel Ricciardo into Turn 2 – with both continuing – while the Haas drivers were embroiled in a close fight on the final lap as they battled for 13th.

“It always brings a bit more excitement,” said Gasly on the standing restart.

“It creates some sort of adrenalin inside you and yeah, I knew there would be some opportunities because you start only for two laps, everybody is a bit like lions out of the cage.

“Everybody goes for everything and tries to make up as many positions as they can in a very short time.

“I think… I didn’t see the replay of the last two laps but I must say on my side it was very intense, I really enjoyed it. If anything, hopefully in the future they will do the same.”

Second-placed Sebastian Vettel also backed the decision to have a late restart but warned Formula 1 against becoming too artificial.

“I think if you have a positive outcome and you make up positions then you’re happy about it,” he said.

“If, obviously, the worst case was probably for Lewis, then you’re not happy about it.

“But it has become more and more like this in the past, more and more focused on creating a show, so I hope that in the future the races are more exciting.

“I think it was probably an exciting race for various things happening and so on, but yeah, I think we just need to watch out that it doesn’t become too artificial and we don’t lose the roots of the sport.”