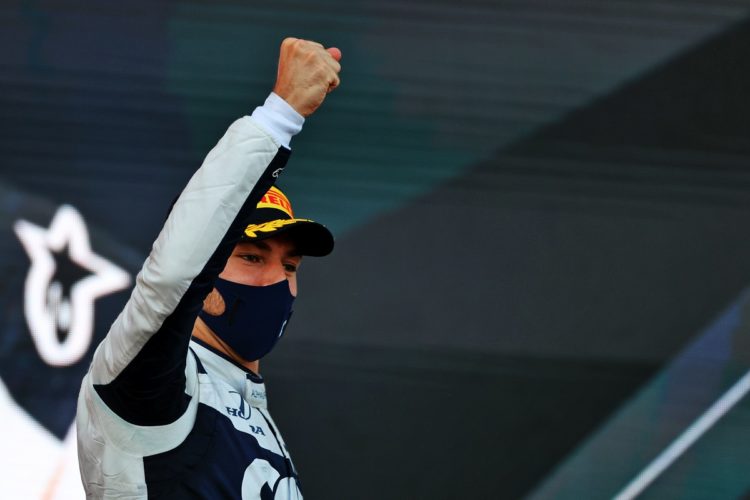 Pierre Gasly says it feels “incredible” to finish on the podium at the Azerbaijan Grand Prix, as he was nursing an engine issue for the second half of the race.

The Frenchman secured his third career top-three finish in Baku, as he took third on the road behind Sergio Perez and Sebastian Vettel.

Gasly benefitted late on from a tyre failure for Max Verstappen and a lock up at a red flag race restart for Lewis Hamilton, which promoted him into the top three.

However, the 25-year-old tussled with Charles Leclerc for the final spot on the podium during the final two laps, which made for a “super-intense” run to the chequered flag.

“I really don’t just know what to say, it was such an intense race and super-intense last two laps,” Gasly said.

“The car has been incredible all weekend, the car showed in every session we were there, qualifying was mega but I didn’t know if we could keep up that position or if we could fight for the podium, but in the end we did it.

“I had already finished first one time [Italy 2020], second one time [Brazil 2019], so I was missing that third place. It feels incredible to get back on the podium.

“It was a very difficult race for me, from mid-race onwards, with an engine issue, so we were losing quite a lot of power down the straights.

“Seb managed to pass us in the middle of the race. In the last two laps I thought it was going to be very difficult with Charles behind us.

“I tried and in every braking I wasn’t sure I was going to be able to stop the car but I had to go for it to get the podium and this feels incredible.”