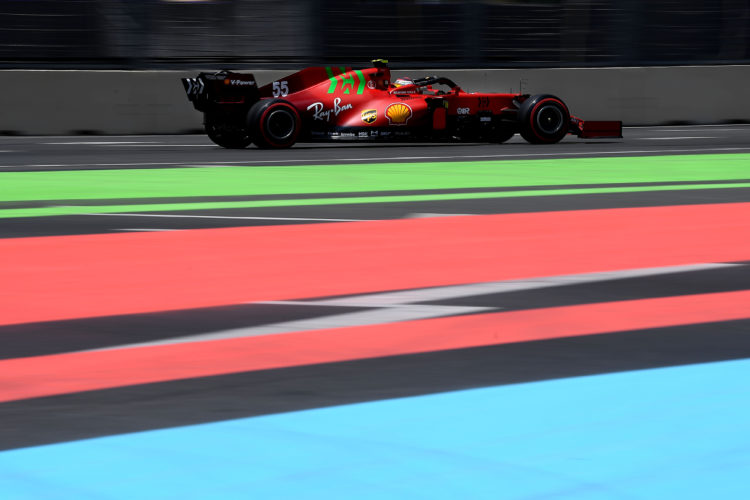 Carlos Sainz was left frustrated amid the Q3 mess that he felt wrecked his prospects during qualifying for Formula 1’s Azerbaijan Grand Prix.

Sainz was provisionally fifth after the opening Q3 runs during which Ferrari team-mate Charles Leclerc set the overall benchmark.

The session was then halted, and not restarted, after Sainz spun off approaching Turn 3, moments after AlphaTauri’s Yuki Tsunoda hit the wall at the same corner.

“I started the lap too close to Yuki,” explained Sainz. “There was a massive traffic jam in the last three corners, like we all expected.

“The FIA tried not to [allow] this to happen, but there was someone up front playing games and we were all in a massive jam.

“I started the lap too close [to Yuki], I was very quick through Turn 1 and Turn 2, and then I saw Yuki locking up and crashing in front of me.

“I had doubts whether to try and do the corner and continue my lap or hit the brakes harder and avoid the crash, and in the end, by trying to do one or the other I ended up crashing myself.”

It marked the second successive grand prix at which Sainz has missed out on a potentially higher position in Q3, having been in the pole mix in Monaco prior to Leclerc’s session-ending accident.

“I’m disappointed today,” he said. “Again, it hurts, because it’s two consecutive weekends that we could fight for pole position and there’s always something happening in front of me, which is very disappointing – I’m not going to lie.

“At the same time, I’m happy for the team, happy to show that we are getting better and I will try to recover tomorrow.”