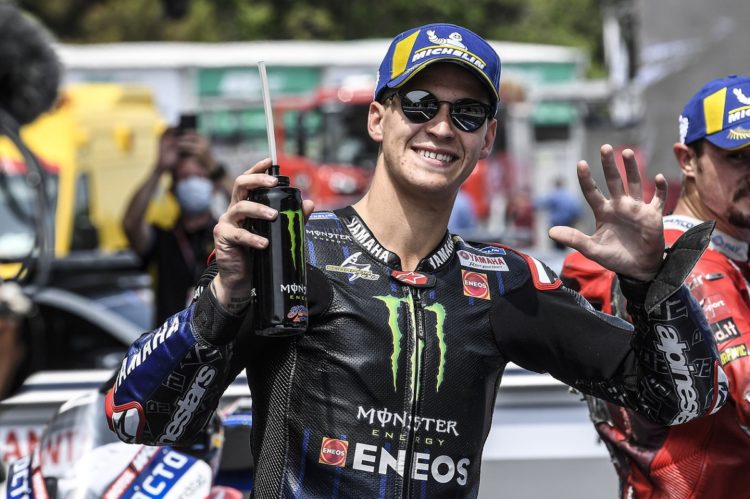 Fabio Quartararo says qualifying is the “best thing” following his blistering run to a fifth straight pole of 2021 at the Circuit de Barcelona Catalunya for the Catalan Grand Prix.

It was ultimately enough to secure his 15th career premier class pole and thus putting him in a great position to extend his already-comfortable 26 point lead over Johann Zarco in the Riders’ standings.

“Qualifying is the best thing to do on a race weekend, I enjoy it much more than the race because you push yourself to the limit,” said Quartararo.

“It was great to achieve the pole position, my last lap when I saw the yellow flag was much better than my first two laps but the main thing is that I’m still on pole position.

“It’s good to know that we still have a little bit (more in reserve) for the time attacks.”

The Frenchman says he has “a lot of confidence” in being able to convert pole to his fourth victory of the year, though admitted the choice of which tyre to opt for was not straightforward.

“I have a lot of confidence [for the race] because I feel comfortable on the bike at the limit, and have felt great in all the races we have done this year and the speed has been good with the medium and hard [tyre], so it’s just a question of which one to use tomorrow,” continued Quartararo.

“I have no idea, it’s not easy to choose but the most important thing is that in every condition racing with the medium is a great option and racing with the hard is also good, so we’ll just try and figure out which one is best.”

“I just missed [doing practice starts] in FP3 but in FP1 and FP2 I did some starts so this is not a big issue and I think that with the hole shot device we should be able to make a great start tomorrow, the Ducatis near me will be fast so I will focus on trying to get off the line as well as possible,” explained the six-time premier class race victor.

“I think Franco is really fast, Jack did a really good race simulation today too but when you start at the front at Barcelona it helps a lot, Joan was really fast last year so I think he will also be one of the contenders for victory tomorrow.”