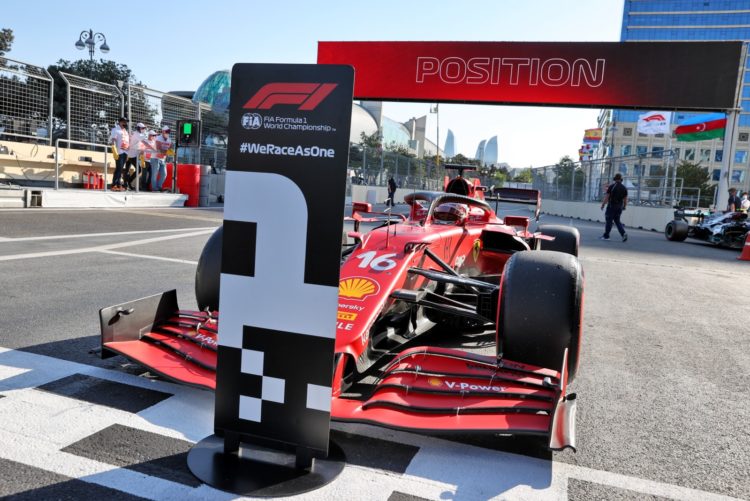 Charles Leclerc described his pole-winning lap for the Azerbaijan Grand Prix as “quite s***” and expressed doubt that he can retain his position in race trim.

Leclerc picked up a double tow from the Mercedes drivers, who were preparing their hot laps, and set the quickest time through the opening stages of Q3.

Leclerc’s time remained unbeaten in the immediate aftermath and drivers were denied a second push lap after Yuki Tsunoda, and then Carlos Sainz, crashed at Turn 3.

“It was quite a s*** lap I thought,” he said. “There were like two or three corners I did mistakes but then of course, I had the big tow from Lewis [Hamilton] in the last sector which helped me a little bit.

“But overall I think we would have been there or thereabouts for pole without the slipstream. It’s a good day! I didn’t expect to be as competitive as we were today.

“I think I was improving again with the red flag but it’s like this, another pole.”

Leclerc will line up on the grid in front of championship front-runners Hamilton and Max Verstappen, who have shared the wins across the opening five rounds.

Ferrari has not claimed victory since the 2019 Singapore Grand Prix and Leclerc fears holding his advantage up front will be difficult.

“The car felt quite okay [in race simulation] but I believe Mercedes and Red Bull have something more than we have in the race especially,” he said.

“We’ve seen that in FP2 so it’s going to be very difficult because here it’s not like Monaco, they can overtake.

“I will try to do the best job possible and hopefully, we can keep that first place but it’s going to be difficult.”