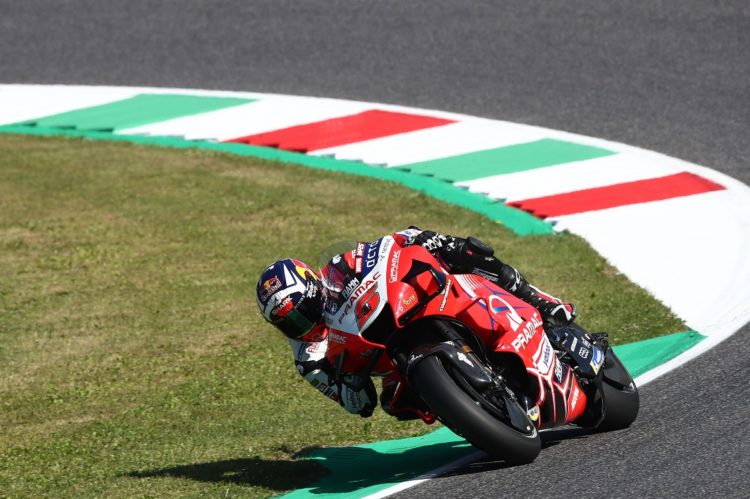 Johann Zarco led the way at the end of Friday with the fastest time in FP2 for the Catalan Grand Prix after shading Franco Morbidelli with a last-gasp flyer.

Zarco was a permanent fixture within the top ten throughout the 45-minute test, the Pramac Ducati racer lapping around half-a-second slower than the leading pace set by Petronas SRT’s Morbidelli.

A mini time attack as the session reached its climax gave the Frenchman an opportunity to close in on the leading Yamaha, a chance he duly he took as he fired to the head of the timing pylon on a 1:39.662s.

Morbidelli was keen to stamp his authority on Friday though as he thundered across the line just moments later to record a time 0.190s quicker to establish himself once again at the top of the pile.

Zarco had managed to start one final flying effort though, guiding his Desmosedici to a tour just 0.021s faster than Morbidelli as he snatched back the initiative to end the opening day of running fastest of all.

Morbidelli again had to settle for second after losing out to Aleix Espargaro in the closing seconds of FP1 just hours earlier, though he was at least the highest classified Yamaha rider-series leader Fabio Quartararo ending Friday just over a tenth back in third.

Brad Binder stormed to the head of the times with his own final gambit just a couple minutes until the session came to a close, but was shuffled back fourth by the end to end the day as fastest KTM ahead of Francesco Bagnaia’s factory Ducati.

Maverick Vinales completed another strong session for Yamaha in sixth ahead of Jack Miller’s Ducati, while Enea Bastianini was an impressive eighth quickest on his year-old Avintia Ducati-and fastest rookie to boot.

Aleix meanwhile was just able to edge out brother Pol for ninth on the timesheets, the Aprilia man ahead of the Honda pilot to complete the top ten.

Miguel Oliviera fell back to 14th after failing to set a competitive lap in the closing moments ahead of Marc Marquez, while Joan Mir was only 16th on the sole Suzuki entered this weekend with the absence of injured team-mate Alex Rins.

Valentino Rossi was unable to match the pace of his Yamaha stable-mates as he ended Friday a lowly 19th, the Italian over a second down on the next slowest M1 of Vinales.

Luca Marini was the only man to suffer an off during the test, the VR46 Avintia man coming off his Desmosedici at Turn 4 early on before returning to track later on to post the 13th best effort.