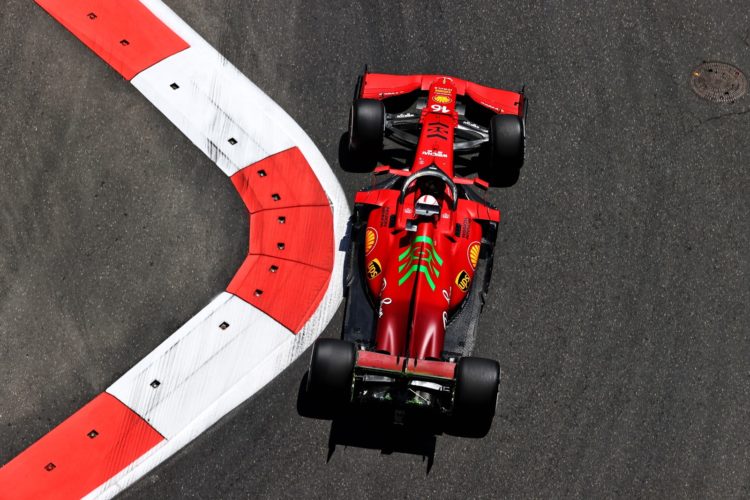 Ferrari duo Carlos Sainz and Charles Leclerc described the performance of the SF21 as better than expected in Azerbaijan but remain wary of McLaren’s speed.

Ferrari has been locked in a battle with McLaren for third in the championship through the early stages of the 2021 campaign, though emerged as a leading contender in Monaco.

Both drivers played down expectations for this weekend’s event in Baku but finished third and fourth respectively at the conclusion of Friday’s running, with Leclerc’s prospects of finishing higher undone by a slow-speed crash at Turn 15.

They were slower only than Red Bull duo Sergio Perez and Max Verstappen while Mercedes classified 11th and 16th respectively, with McLaren eighth and 13th on the leaderboard.

Leclerc commented that Ferrari’s pace “looks promising” and “is definitely better than expected” around the streets of Baku but cut a cautious figure.

“McLaren are very, very quick, but they haven’t showed it for some reason today,” he said.

“Maybe it was less of a clean day compared to us, but I feel that they are still a bit ahead of us here, so we’ll have to wait and see tomorrow.

“Red Bull and Mercedes – I don’t really know what happened with them – I’m pretty sure they will be in front, and it will be basically a fight with McLaren, that are our main competitors, so we need to make sure we do everything perfect because they are doing very few mistakes this year.”

Sainz, who was just 0.027s behind Verstappen through the Soft tyre runs, suggested Ferrari’s pace was slightly inflated.

“We’re definitely a bit quicker than maybe what we anticipated, but it is true also that I got a couple of tows in my good laps,” he said.

“The long run we didn’t quite clearly see the pace, so maybe the whole picture is not quite as clear as it can get. And probably tomorrow will be a better indicator.

“But we’re definitely not as quick as in Monaco, that’s for sure.”