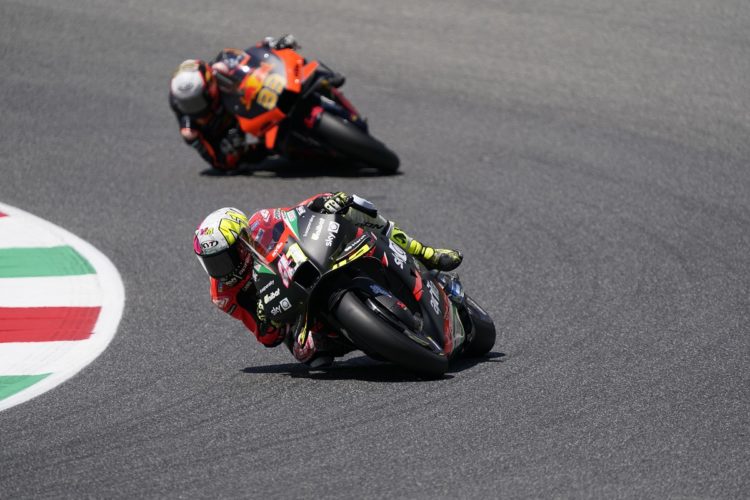 Aleix Espargaro fired his Aprilia out the blocks well early as he led the way in first practice for the Catalan Grand Prix at the Circuit de Barcelona Catalunya.

Espargaro looked strong throughout in the opening session of the weekend, the Spaniard firmly entrenching himself within the top three across the entirety of the 45-minute test, led for the majority by Petronas SRT Yamaha pilot Franco Morbidelli following an early 1:40.402s tour.

Improved times ultimately were hard to come by as the usual late time attack runs failed to materialise, although Aleix headed out for a final couple of hot laps as the clock ticked down.

His last effort of 1:40.378s was just enough to relegate Morbidelli to second at the death, and with other improvements non-forthcoming it was Aprilia that began the Catalan GP weekend on top.

Morbidelli’s Yamaha remained as the runner-up as the chequered flag was waved, Pol Espargaro third quickest on the first of the factory Honda machines.

Maverick Vinales was fourth overall ahead of the Pramac Ducati of Johann Zarco, while series leader and defending Barcelona race victor Fabio Quartararo was sixth.

Miguel Oliveira-keen to build upon his first rostrum of the year at Mugello last weekend-was a strong seventh for KTM ahead of reigning MotoGP world champion Joan Mir on the sole Suzuki for this event, Alex Rins having to miss this outing after breaking his wrist in a cycling incident on Thursday.

The top ten was completed by the factory Ducati duo of Jack Miller and Francesco Bagnaia, just 0.703s covering the lead men.

Jorge Martin meanwhile was an impressive 12th fastest in his first running since his nasty crash at Portimao nearly two months ago that has seen him miss the past four contests, the ’18 Moto3 world champion firing in a late improvement while utilising a tow from Marc Marquez-who ended up just behind in 13th.