Zarco and Martin remain with Pramac Ducati MotoGP squad for 2022 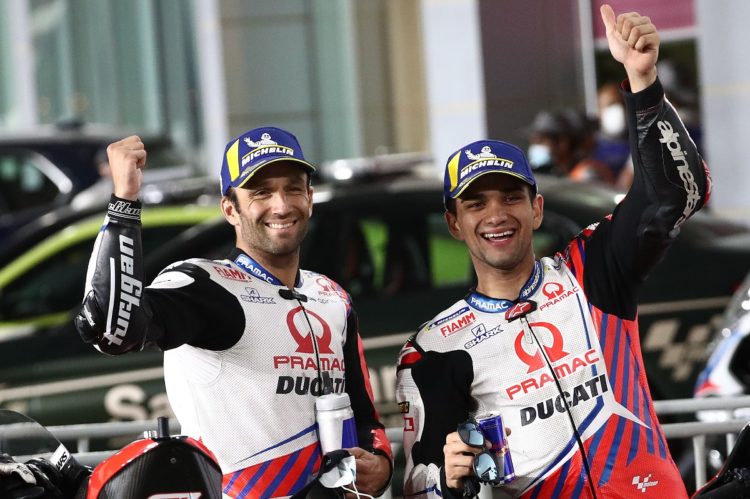 Pramac MotoGP duo Johann Zarco and Jorge Martin will remain with the squad for 2022 after each signing single year contract extensions, it was announced on Thursday morning.

Both Zarco and Martin joined the Italian outfit-each on factory Ducati contracts- for this season and have already left big impacts so soon into their tenure with the manufacturers official satellite team so far this season.

Zarco currently sits second overall in the riders championship-ahead of both Ducati factory riders-having captured a total of three rostrums across the opening six events, the Frenchman having led the series after scoring a pair of runner-up finishes in the first two races in Qatar.

Martin meanwhile has endured a tough rookie premier class campaign after suffering contusions to his head, right ankle as well as his right hand in a nasty crash in practice for the Portuguese Grand Prix in Portimao, the ’18 Moto3 world champion having not returned to competition since after only taking part in the first two races of the term.

He did manage to score a remarkable pole position and maiden podium result in the second Qatar contest though, his early speed enough to convince Ducati to keep him onboard for a further campaign, Martin looking to return to racing for this weekend’s Catalan GP in Barcelona.

Ducati Corse Sporting Director Paulo Ciabatti says he is happy with how Zarco and Martin “inserted themselves” into Pramac so far in ’21, confirming they will continue to have a pair of full-factory current spec Desmosedici’s next year.

“Johann and Jorge this year have inserted themselves very well in the Pramac Racing team,” said Ciabatti.

“For this reason, together with Paolo Campinoti and Francesco Guidotti, we have decided to proceed with them into 2022.

“We will put at the disposition of both, the official bikes for next season as well. We are certain that they will provide us with many satisfactions.”

Zarco continues to build his career following an ill-fated move to KTM for the ’19 season, the double Moto2 world champion having raised eyebrows with a strong two first two MotoGP campaigns with the Tech 3 squad riding a satellite Yamaha.

He mounted the podium on six occasions on his way to a pair of sixth place results in the riders standings, though his switch to KTM ended with six events to go in the year after struggling to adapt to the Austrian manufacturers RC16.

A last minute deal to replace the injured Takaaki Nakagami at LCR Honda for the final races of the year saw him perform well, grabbing the attention of Ducati which led to a ride with Avintia for ’20 on a year old machine.

A pole and podium at the Czech GP at Brno was enough to convince Ducati to move Zarco to Pramac to replace the promoted Jack Miller, while Moto2 rider Martin got the nod to replace Francesco Bagnaia, who had secured the second factory Ducati berth after Andrea Dovizioso parted with the marque.

Martin meanwhile defected from KTM to join the Ducati family, having been competing with the KTM-aligned Ajo team in the intermediate class since graduating from the lightweight class after winning the title with Gresini back in ’18.

He scored two victories in the class in ’20 on his way to fifth in the points, despite missing two encounters after contracting Covid-19 mid-season, electing to accept an offer from Ducati after being offered a full-fat ’21-spec Desmosedici for his rookie season.