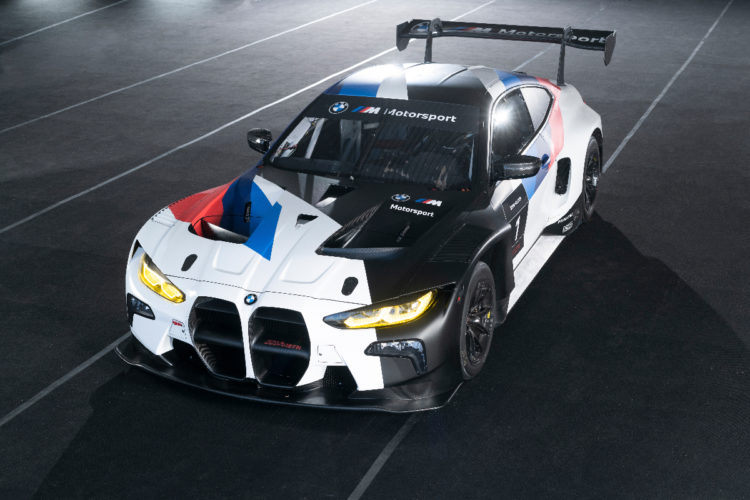 The car was unveiled in its works livery ahead of the Nürburgring 24 Hours, where the Bavarian marque is set to defend its 2020 crown.

The new M4 GT3 is largely based on the M4 Competition road car, with a three-liter twin turbocharged V6 engine, capable of producing up to 590 horsepower.

BMW states that it focused car development on three areas of improvement compared to the predecessor: driveability, cost efficiency and operation.

It claims that the car is more accessible for amateur drivers in terms of handling and cockpit equipment, while also stating that it is easier on tyres and offers greater consistency.

“The development work on the BMW M4 GT3 is now on the finishing straight, and the 24-hour race at the Nürburgring is the perfect stage on which to present the car in its BMW M Motorsport design and thus to herald the final phase leading up to the first race outings,” said Markus Flasch, CEO of BMW M GmbH.

“The new BMW M4 Competition provides the perfect basis for the BMW M4 GT3, whose engine was designed from the outset for use at the racetrack. This underlines how road car and race car development always go hand in hand at BMW M GmbH.

“The new car offers state-of-the-art technology, thanks to our technology partners. They are among the best in their respective fields, and we are delighted to have them supporting us on the development of the BMW M4 GT3 with their specific know-how and areas of expertise. That is the perfect basis for a successful new race car.”

BMW states that the M4 GT3 will contest its first official race on June 26, where it will contest the fourth round of the Nürburgring Endurance Series.

It is currently unclear who will pilot the car, although several works drivers including Augusto Farfus and Philipp Eng have been involved in development.

The M4 GT3’s maiden race outing will likely be in the NLS’ SP-X class, which is intended for non-homologated machinery.

After the race, the car will undergo further testing in preparation for its debut season in 2022.

The development for the M6′ replacement started in early 2020, before undergoing a rollout in July of that year.

A notable fact about the M4 GT3 is that the steering wheel for the car was developed in partnership with simulator hardware producer Fanatec. According to BMW, the wheel for the M4 GT3 is ‘the first in the world that can be used in both a real race car and a simulator without modifications.

Testing intensified in 2021, with the car logging 14,000 test kilometres at Spanish tracks Almeria and Monteblanco, as well as the Nürburgring Nordschleife.

After further testing, the car will be available for customers at the beginning of the 2022 season, where it will compete in various GT3-based series around the world.