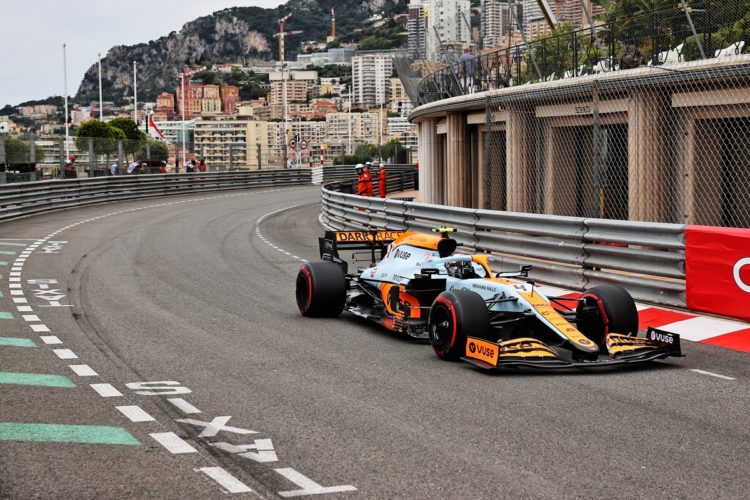 McLaren’s Lando Norris has admitted surprise over the strong pace he displayed during the final stage of qualifying ahead of the Monaco Grand Prix.

Norris ended the session with the fifth fastest time, with his lap time reading just over two and a half tenths down on pole position.

The Briton was the only driver from the McLaren stable to reach the top ten, as team-mate Daniel Ricciardo dropped out in Q2.

“I am very happy,” Norris said. “I did not think we would be P5. The car has been good all weekend.

“I have felt comfortable since FP1. I was super happy with my lap. I put it all together, I did all the best corners on that lap, which I am pleased to do.

“Especially after the last few weeks. It has been nice to put qualifying all together. To be only two tenths off pole is a good achievement for us.

“This track is very different. We did not think we would be that strong. We prove ourselves wrong. A P5 is a good achievement for us. It felt like a good lap, and we made a lot of good decisions.”

McLaren is currently embroiled in a battle for third in the championship with Ferrari, however the latter starred in qualifying, with Charles Leclerc taking a home pole position.

Norris asserts that McLaren is not surprised by the Scuderia outfits pace, stating the team is shocked that it was as close to the Maranello squad as it was.

“Here we were expecting them [Ferrari] to be ahead,” Norris said. “I was surprised that we were only two tenths off.

“That is a good thing for us. We were expecting to be more than two tenths off in qualifying.

“We have to understand the car a little bit more, we have not fully understood it and know exactly the limitations.”