Leclerc secures home pole – but then crashes out 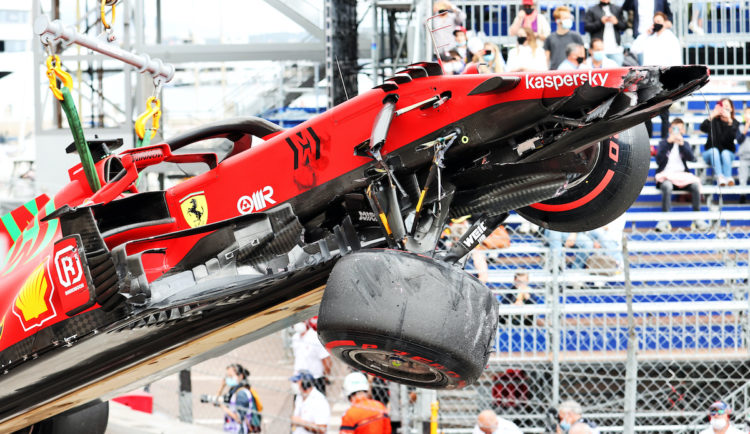 The damaged Ferrari SF-21 of pole sitter Charles Leclerc (MON) Ferrari, who crashed out at the end of qualifying

Charles Leclerc scored pole position for his home race in Monaco though sealed it in unconventional fashion after suffering a hefty crash on his second run.

Ferrari emerged as a contender throughout the weekend in Monaco and Leclerc moved to the front on his first Q3 push lap with a time of 1:10.346s.

As he tried to improve on his second Q3 push effort Leclerc turned in too early to the second part of Piscine, clipped the inside barriers, causing damage to the right-front of the SF21, and as a result careered heavily into the outside wall.

The session was red-flagged and as a consequence no-one was able to improve.

It sealed a first pole position for Leclerc and Ferrari since the 2019 Monaco Grand Prix but both must now assess the level of damage to the SF21.

Max Verstappen was second, with Valtteri Bottas third, and both were setting rapid sector times prior to the red flag, forcing them to abandon their respective laps.

Hamilton on the back foot

World Champion Lewis Hamilton was off the pace throughout the weekend and was never a factor for pole position.

Hamilton is now set for a race of damage limitation after qualifying only seventh – five places behind title rival Verstappen.

Sebastian Vettel put in his strongest display of the campaign, taking eighth, as Sergio Perez’s subdued season continued as he classified ninth.

Antonio Giovinazzi rounded out the top 10 for Alfa Romeo.

Daniel Ricciardo has twice taken pole in Monaco, dominating the weekend in 2018, but this year he has lacked pace compared to Norris.

Ricciardo spoke on Thursday of having to understand where he was losing time but come qualifying he was a non-factor, and finished Q2 half a second behind team-mate Norris.

Ricciardo will start the race from 12th, one spot behind former team-mate Esteban Ocon, as Alpine also struggled for speed.

George Russell once more escaped Q1 for Williams but went no further as he finished at the foot of the pile in Q2.

Fernando Alonso had stressed at his home grand prix in Spain that he and Alpine still had to address its qualifying pace, wary that it could cost him in Monaco.

Alonso’s concerns proved accurate as the two-time World Champion, twice a victor at the event, was dumped out in Q1 having struggled all weekend for one-lap performance.

Alonso was only 17th in the first knockout session in which the other four drivers to be eliminated were all Monaco Formula 1 debutants.

AlphaTauri’s Yuki Tsunoda beat Alonso to grab 16th while Nicholas Latifi – experiencing a Formula 1 race weekend at a street track for the first time owing to 2020’s calendar changes – was 18th for Williams.

Schumacher had beaten Mazepin in each of the first four qualifying sessions but his hopes of a full whitewash dissolved when he crashed heavily in the closing minutes of FP3.

Schumacher drifted wide through Casino Square and caused heavy damage to the left-hand-side of the Haas VF-21 upon impact.

Haas quickly determined that the damage was not repairable during the two-hour window between Schumacher’s crash and the start of Q1.

He will be permitted to start the race from the back and Haas has already notified its intention to take a new gearbox due to the damage.