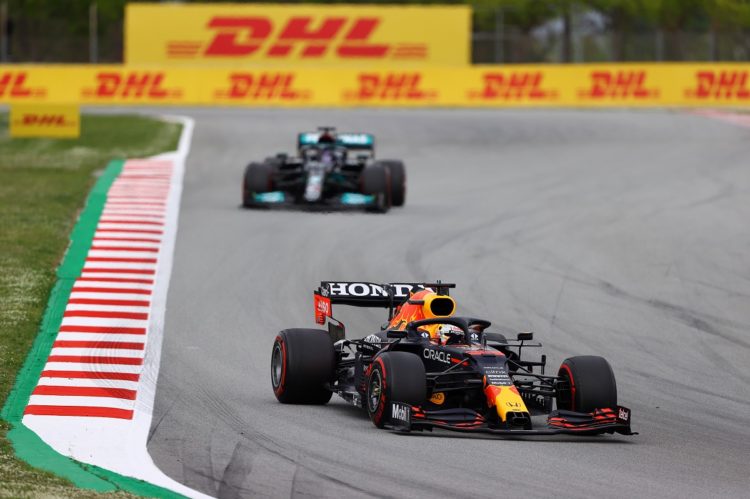 Mercedes has asserted that Lewis Hamilton would’ve overtaken Max Verstappen for the lead of the Spanish Grand Prix without making a second pit stop.

After Verstappen made his first pit stop last Sunday, Hamilton stayed out for a handful of laps, meaning his tyres were fresher than Verstappen’s when he emerged from the pit lane.

Hamilton caught up to the Red Bull driver but didn’t overtake him, with Mercedes then switching to a two-stop strategy which saw Hamilton reel Verstappen in and triumph in Barcelona.

“He [Lewis] actually said to us after the race, ‘I was almost about to do it and perhaps you should have left me out, I would have done it on track’ and that looked like it was quite possible,” Shovlin said.

“I think with the fresher tyres that were on Lewis’ car it would have probably happened at some point because Max would have started to get pretty significant degradation towards the end of the race.”

However, Shovlin highlighted that if Hamilton made the overtake through a one-stop strategy, Verstappen then could’ve pitted for fresh tyres and hunt Hamilton down.

“If we had done that you then have the disadvantage almost of being the race leader and Max could have done to Lewis what we did to him,” Shovlin said.

“So, he could have converted to a two stop as soon as Lewis had overtaken him, and this might have happened around the point that we decided to pull the trigger on the extra stop anyway.

“So, in some ways it was actually better to not do that overtake on track, use the fact that for Lewis he was in P2 and the worst case scenario of the extra stop was that he would finish in P2.

“For us it was worth a gamble but there was less chance that Max as the race leader was going to make that move for the extra stop.”