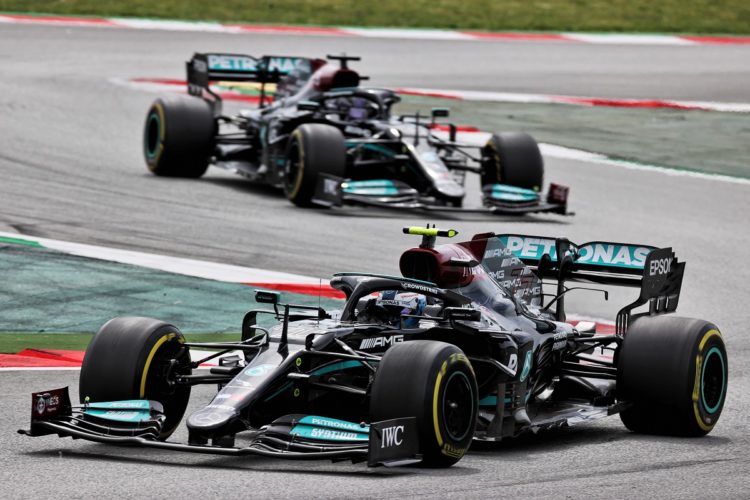 Mercedes’ Valtteri Bottas has defended his decision to battle team-mate Lewis Hamilton for position during the Spanish Grand Prix despite the different strategies between the pair.

Hamilton dropped behind Bottas after making a second pit stop in an attempt to hunt down Max Verstappen and overtake for the race lead.

Although Hamilton went on to claim victory, he lost a small amount of time in his pursuit of Verstappen while following team-mate Bottas.

Bottas was instructed not to hold Hamilton up over team radio, as the latter had much fresher tyres, however Hamilton followed the Finn for half a lap before making an overtake at Turn 10.

Bottas explained that he was focusing on building a gap to Ferrari’s Charles Leclerc behind in order to make another pit stop for the fastest lap and an extra championship point.

“I got the message and obviously we were on a different strategy at that point,” Bottas said.

“Unless something crazy happened I wasn’t really fighting anymore with him but the thing was at that time I was trying to get Charles out of my pit window so that I could stop again and be ahead of him.

“I was really concerned that I didn’t want to lose too much time and I was really focusing on my race. So it’s about balancing things.

“Of course, as a racing driver, you prioritise yourself, your race, because that’s what you do but also we work as a team so you don’t want to ruin the win for the team if that’s possible if it’s not possible for you.

“I tried to do the best thing I could do for us as a team and for myself. It’s always hard doing those kinds of things and as the other driver, if he predicts what’s going to happen and where to go. In the end, it was kind of OK.”

Hamilton states he had no issue with Bottas’ decision to not pull aside, revealing he wasn’t aware that Bottas had been given a team order instruction.

“Honestly, I didn’t know he had a message so in my mind I was like ‘we are racing’ and that’s totally fine for me, particularly early on in this part of this season,” Hamilton said.

“In my mind I was like ‘OK, I’ve got to get close and go for an overtake’. We were on massively different strategies because I was going to get him at some stage because I had much better tyres.

“We were going into Turn 10, I thought there was a gap there, then I wasn’t quite sure and then there was a gap and Valtteri was completely fair, I hope I didn’t lose him too much time.

“This is how we win as a team. We sometimes are in that position where we’ve got to put the team first and getting a second and a third is good, but getting a first is max points, and that’s key.”