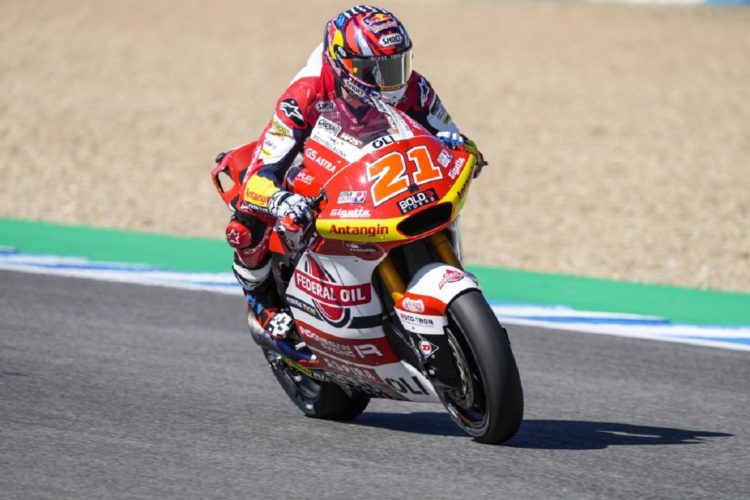 The Italian made a strong start from the middle of the front row to snatch the lead away from pole-man Remy Gardner on the run to Turn 1, immediately looking to put daylight between himself and the chasing pack behind.

His cause was aided by a struggling Gardner, the Ajo racer at times lapping over half-a-second a lap slower than Di Giannantonio as he came under pressure from the likes of team-mate Raul Fernandez and VR46’s Bezzecchi.

Di Giannantonio’s leading gap had swelled to 2.7 seconds by the time Fernandez finally dispatched Gardner for second at around a thirds distance, the rookie straight away able to match the times of the leader.

Fernandez though began to struggle for speed as the race entered its final stanza, first being passed for the runners-up spot by a charging Bezzecchi before being put under pressure by a recovering Gardner and Sam Lowes.

Di Giannantonio meanwhile controlled his lead expertly to take the chequered flag 2.096s clear of Bezzecchi to claim his first ever intermediate class win, Gresini’s first across all classes since the passing of team owner Fausto in February.

The battle for the final rostrum spot went right down to the wire as a fading Fernandez doggedly clung on, Lowes grabbing the position with a bold move at Turn 2-Gardner following through to fourth as the Marc VDS pilot forced Fernandez to sit up.

Lowes ultimately had enough pace to keep clear of the Aussie over the final couple of tours, completing the podium despite dropping to seventh on the opening circulation after a poor start.

Joe Roberts had a quiet Spanish outing to claim eighth on his Italtrans-run Kalex, while Aron Canet and Marcel Schrotter completed the top ten.

Augusto Fernandez was an early retirement on the second Marc VDS challenger after running third in the early goings, the one-time Moto2 race winner crashing out at Turn 6 shortly after being relieved of the spot by name-sake Raul.

Jake Dixon failed to make the start as a result of his nasty warm-up crash that facilitated a hospital visit where it was found he had suffered a concussion, the Brit having been due to start tenth for the encounter.

Gardner continues to lead the Moto2 riders points standings following his run to fourth, though now by a reduced three point margin over Lowes, while Di Giannantonio stays fifth behind Fernandez and Bezzecchi but now just 17 behind Gardner.