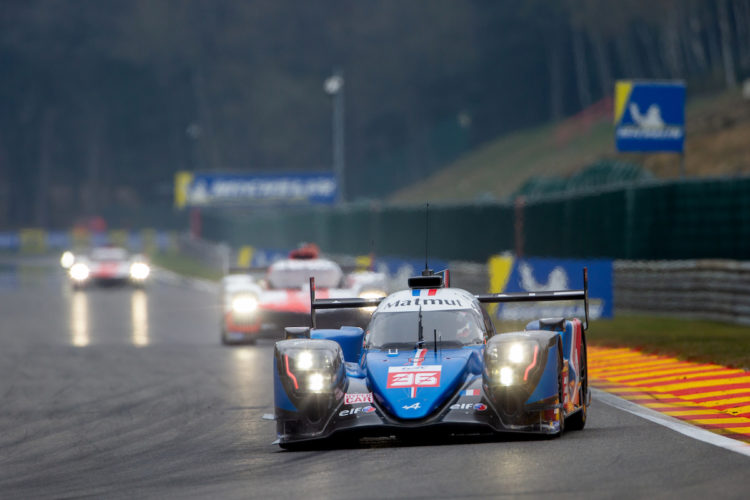 The Toyotas controlled the race early on, with each car having a turn in the lead, but the Alpine has managed to jump them, two hours into the race, which has so far seen no safety cars or full course yellows.

In LMP2, #22 United Autosports ORECA 07-Gibson’s Filipe Albuquerque leads after an incredible first stint from Phil Hanson, where he briefly took the lead on the first lap before the Toyotas useds their straight line speed advantage to reclaim first and second.

Around 2 seconds back is Frits van Eerd in the #29 Racing Team Nederland ORECA 07-Gibson, who has so far managed to stay on the back of Albuquerque.

Catching him, though, is Ferdinand Habsburg in Team WRT’s #31 ORECA 07-Gibson, currently in third but only 5 seconds back, catching at a few seconds a lap.

The third-placed car, Neil Jani’s #92 Porsche 911 RSR-19, led for most of the first two hours, until rear punctures hit both factory Porsches and they had to pit off schedule.

Finally, GTE Am is lead by Alessio Rovera in #83 AF Corse Ferrari 488 GTE Evo. Second is #77 Dempsey-Proton Porsche 911 RSR-19’s Christian Reid, who has receovered from his heavy qualifying shunt yesterday.

Third in class is  Ben Keating, behind the wheel of #33 TF Sport Aston Martin Vantage AMR.