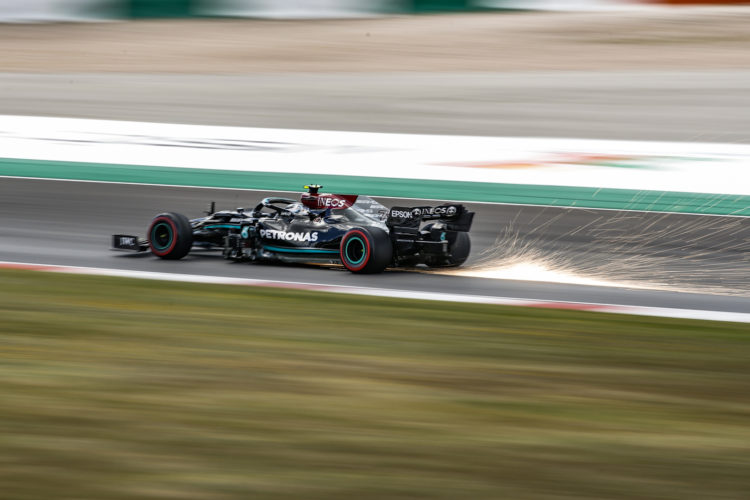 Valtteri Bottas made it three different polesitters in as many races this year after beating Mercedes team-mate Lewis Hamilton by just 0.007s during qualifying for Formula 1’s Portuguese Grand Prix.

In a session dictated by tyre warm-up, varying compounds and occasional gusts at Portimao the quickest time actually came during Q2 – with Hamilton dipping into the 1:17s on Mediums, almost half a second clear.

Through the opening Q3 runs the Mercedes drivers, along with Red Bull’s Max Verstappen, all used the Soft tyres and it was the Dutchman who clocked the quickest time.

But Verstappen’s effort of 1:18.209s was scrubbed from the leaderboard after he was judged to have exceeded track limits following a moment through Turn 4.

Bottas’ time of 1:18.348s left him 0.007s clear of Hamilton – though that was still almost four-tenths shy of the Briton’s Q2 benchmark, hinting that quicker lap times were possible, as the World Champion chased a potential 100th career pole.

Both Mercedes drivers switched to Mediums for their second Q3 push laps but were unable to improve and retained their respective positions.

Verstappen was the only realistic threat to Bottas but while he improved from 10th, following his earlier off, he fell 0.398s short of Bottas and had to settle for third spot.

Sergio Perez was fourth, just over a tenth behind Verstappen, as Red Bull secured a second-row lockout.

Carlos Sainz cut an impressive figure through most of qualifying and he built upon his potential by qualifying in fifth position, a mere 0.003s ahead of Alpine’s Esteban Ocon.

McLaren’s Lando Norris – third in the standings after his Imola podium – was seventh, with Charles Leclerc eighth and Pierre Gasly securing another Q3 spot, taking ninth.

Sebastian Vettel had his most competitive display so far in Aston Martin colours as he made it through to Q3 for the first time since last August’s British Grand Prix.

Williams has made strides with its FW43B this year and George Russell was in the mix in the midfield throughout practice.

Russell delivered on the promise and fell just 0.057s shy of making Q3 as he captured his best qualifying result in Williams colours.

Russell will start the race from 11th position, ahead of Alfa Romeo’s Antonio Giovinazzi and Alpine’s Fernando Alonso, who once more trailed team-mate Ocon.

AlphaTauri’s Yuki Tsunoda and Alfa Romeo’s Kimi Raikkonen were the slowest of the 15 Q2 contenders.

Daniel Ricciardo has had a relatively tepid start to his McLaren career by his high standards but still bagged a healthy quantity of points at each race.

But if he is to continue that streak he must do so from the eighth row of the grid after dropping out in Q1.

Ricciardo was over a second slower than team-mate Norris, who finished second in Q1, having lacked pace through the session.

Lance Stroll was also eliminated at the first hurdle, taking only 17th, while Nicholas Latifi was unable to replicate Russell’s pace and claimed 18th spot.

Mick Schumacher retained his Saturday superiority over Haas team-mate Nikita Mazepin at the back of the pack as he finished within two-tenths of Latifi.