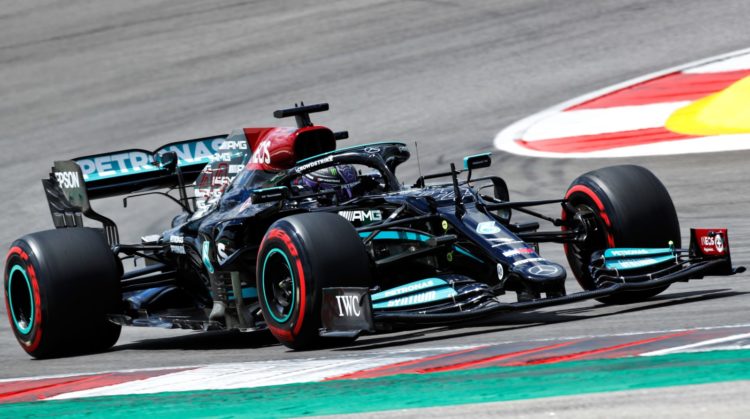 In warm and sunny conditions at a blustery Portimao circuit less than seven-tenths of a second covered the first half of the field in the one-hour session.

Hamilton’s best lap, a 1:19.837s, left him 0.143s up on Verstappen – who spent some time in the pits after a brake-by-wire complaint – when drivers conducted their qualifying simulations.

FP1 pacesetter Valtteri Bottas finished third, 0.344s behind team-mate Hamilton, as the usual three suspects ended up at the top of the standings.

There were fine margins in the second session on Friday afternoon, the start of which had been delayed by 10 minutes, owing to a loose drain cover through Turn 8.

Ferrari once more underlined its year-on-year gains as Carlos Sainz finished fourth, just 0.016s down on Bottas, while Charles Leclerc was seventh.

But they were split by the Alpine duo of Fernando Alonso and Esteban Ocon as the A521s put in their most competitive showing of the campaign so far.

Alonso and Ocon finished within four-tenths of pacesetter Hamilton and were separated by just 0.015s, with the two-time World Champion the faster of the pair.

Daniel Ricciardo finished eighth for McLaren, ahead of Lance Stroll, who was once more Aston Martin’s lead representative.

Sergio Perez rounded out the top 10 for Red Bull, in front of AlphaTauri’s Pierre Gasly and McLaren’s Lando Norris, the Briton within a second of compatriot Hamilton up front.

Williams is still chasing its first point since 2019 and George Russell consolidated a surprise showing in FP1, when he placed seventh, by finishing 13th in the afternoon session.

Yuki Tsunoda was 14th, as he seeks to rebound from his troubled Imola showing, while four-time World Champion Sebastian Vettel had another subdued display, classifying only 15th.

Alfa Romeo duo Kimi Raikkonen and Antonio Giovinazzi were once more clinging to the rear of the midfield, 16th and 17th respectively, 1.4s off the pace.

Nikita Mazepin was comfortably slowest, eight tenths down on Latifi, and over a second behind his fellow rookie Schumacher.