Hamilton ‘plans to be here next year’ after tyre test 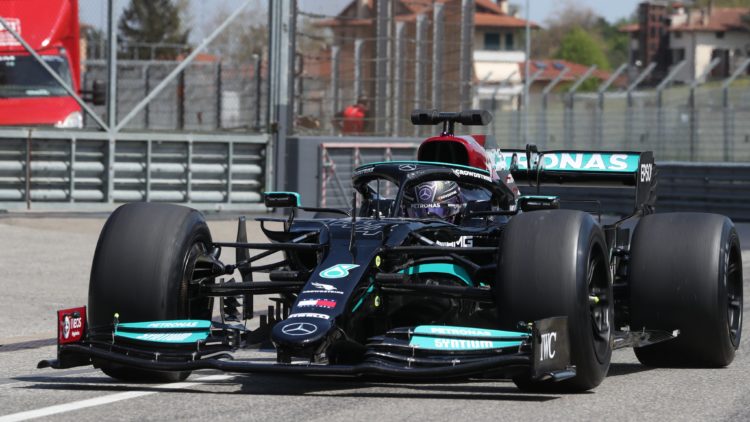 Lewis Hamilton says he was keen to help Pirelli with the development of its 2022-spec tyres, in the wake of his participation in last week’s test, hinting he will extend his time in Formula 1.

Hamilton has rarely hid his ambivalence towards taking part in testing outside of grand prix weekends but stayed behind at Imola for a day of post-race running.

Hamilton drove Mercedes’ mule car, the W10, and completed 130 laps of Imola, getting his first taste of Pirelli’s prototype 18-inch tyres, which will be introduced into the sport in 2022.

The Briton is only currently contracted for the 2021 season but dropped the firmest hint yet that he plans to extend his stay into next year.

“I don’t ever volunteer for test days, and it was probably one of the first ones that I have volunteered for,” he said on the test.

“I immediately regretted it when I woke up in the morning. I was like ‘Damn it’!

“But no, honestly it was at a really great track to test at, so I enjoyed the day and the weather was good.

“And yeah, I plan to be here next year and I want to help Pirelli in helping them lean towards having a better product.

“It’s something the drivers, all of us, have wished for, more performance tyres moving forward.

“It was important for me to see, to gauge the tyre, what the starting point is and what differences I can help, so that from a sport, from a driver point of view, we have more mechanical grip in our tyres, less degradation.

“I think it was a good test, obviously it was the first step of the tyres, but it definitely wasn’t a bad place to start.”

Hamilton also suggested that his continued presence in the sport will help in the ongoing drive for greater diversity and equality within motorsport.

“I’m enjoying this battle we’re having, it’s getting more exciting, it’s been even more of a challenge,” he said.

“As I said, I continue to love working with this team, it’s encouraging to see the steps, for example, my team are making towards becoming more inclusive and more diverse.

“Today they already announced one of the initiatives that we have within our organisation and we still have a lot of work to do as a sport.

“There are still many teams that have continued to stay silent, there are many people so far that have not particularly being held accountable.

“There is still a lot of work to do within this sport, I know that being here, I know I have more of a chance of helping change that than not.”