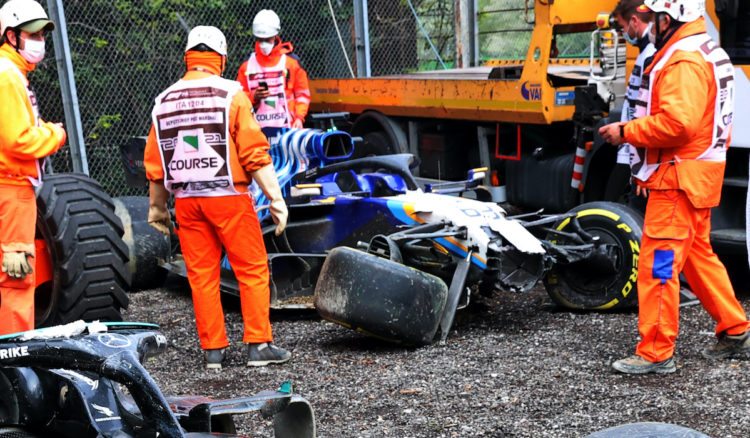 1997 Formula 1 world champion Jacques Villeneuve has placed the blame for Sunday’s Imola Grand Prix shunt on Valtteri Bottas’ shoulders, and is worried the Finn is already struggling in just the second race.

Whilst the general consensus is that it was a racing incident triggered largely by George Russell misjudging the gap, Villeneuve questioned why Bottas was battling a Williams in the first place.

Villeneuve branded Bottas “simply too slow” and believes that will hamper Lewis Hamilton’s campaign as he won’t be providing the seven-time champion with the support he will need to beat Max Verstappen.

“[Sergio] Perez is the newcomer to the Red Bull team and yet is already stronger than Bottas, who is in his fifth season with Mercedes. Perez can help Max more than Bottas can do for Hamilton,” Villeneuve told F1-Insider.

Although Perez struggled in the race, finishing outside the points in 11th, he had a strong Saturday which saw him qualify second on the grid, whereas Bottas was a disappointing eighth.

“I don’t quite understand Toto Wolff. Why does he blame the young Brit in the collision with Mercedes junior Russell?

“Bottas knew that his potential successor was about to overtake him and risked a serious accident with his slight move to the right. He mustn’t do that under these difficult track conditions.

“This shows how tensed Bottas is already in the second race of the season. And that’s not going to get any better. Because he is simply too slow. If he wasn’t, he wouldn’t have had to defend his position so hard against a Williams.”

Russell issued an apology to Bottas after a tense exchange in which he took a swipe at the 31-year-old, hitting him on the helmet. Bottas meanwhile gave the British driver the middle finger whilst sat in his heavily damaged W12.