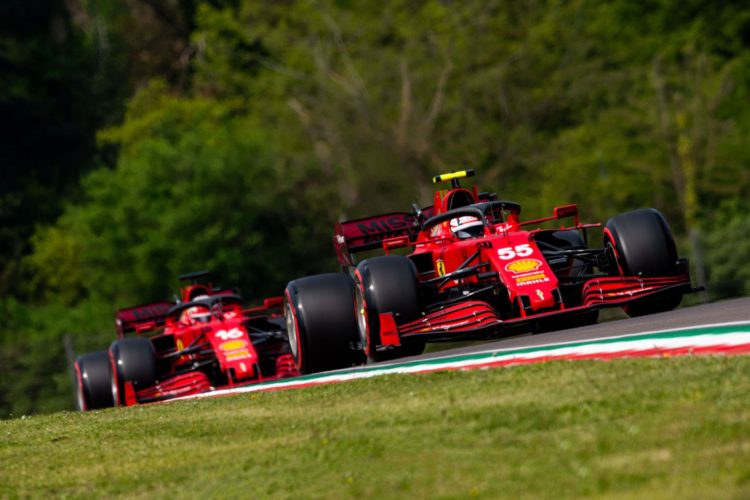 Starting a Formula 1 season with successive double points finishes, but doing so outside of the podium places, would historically set alarm bells ringing at Maranello.

But that it is a sign of encouragement for Ferrari highlights the manner in which ambitions have been reassessed in the wake of its miserable 2020 campaign.

Ferrari’s underpowered, draggy and unpredictable SF1000 limited its prospects, particularly in race trim, as it slumped to a previously unthinkable sixth position in the championship.

This year Charles Leclerc has secured fourth on the grid at both events, qualifying just three-tenths off pole at Imola, to ensure Ferrari has had the third-best package in terms of one-lap performance.

“It is, it is,” said Leclerc after qualifying on whether the SF21 was easier and more predictable to drive than its predecessor.

“Especially on the entry of corners where I have a more stable rear… I was not struggling so much last year but when you are really pushing the limits then you are thinking about it [instability] and already thinking about it costs you a bit of lap time. This year I don’t think about it anymore and just go for it.”

Sainz, having taken eighth in Bahrain, fell out in Q2 at Imola but attributed the exit to his own deficiencies rather than any inherent flaw with the car.

Leclerc converted his grid spot in race trim, benefiting from Sergio Perez’s malaise though overhauled for a second straight race by McLaren’s Lando Norris, while he was followed home by Sainz, who recovered strongly in spite of a couple of early offs in the wet.

It has given Ferrari a haul of 34 points, a modest total, but a considerable upgrade on the nine it accumulated from the corresponding 2020 rounds.

“We are in a tight fight with McLaren for third,” said Team Principal Mattia Binotto. “Is that our objective for the season? I think our objective is often said, it’s to still prove that we can progress in all the areas. I think we can do it.”

Binotto, as outlined, has repeatedly emphasised its focus this year was to iron out its weaknesses ahead of the rules reset in 2022. In that regard the early signs continue the trend that was in evidence across the latter stages of 2020, when Ferrari was encouraged by the feedback regarding new components it brought to the SF1000.

“I think we made good progress,” said Binotto. “That was not easy in a situation where most of the car [development] was frozen, per regulations. I think the power unit made a good step forward. I think that today on the straights we are certainly not lacking the speed as it was in the past. And I think that, as well, the car is behaving well.

“I think it is important to see that simulations, the wind tunnel, at the track, now are correlating certainly better than what it was in the past, and that gives us confidence in the tools, and our design capacity for the future.

“That, I think, was the most important [aspect for 2021] and I think in that respect it is a relief.

“And certainly, the fact that the car is performing better, so that we can have a better result at the end of the race weekend, is important.

“We often said that our performance of last year was not somehow acceptable for a Ferrari brand, so we knew that these areas are important for us still, showing developments in all the areas. So again, I think the performance is certainly a relief.”

Being fourth in the standings, and a non-player in the title battle, is never going to be acceptable for a team of Ferrari’s prestige, but after the horror show of 2020 the green shoots of recovery have at least been laid.