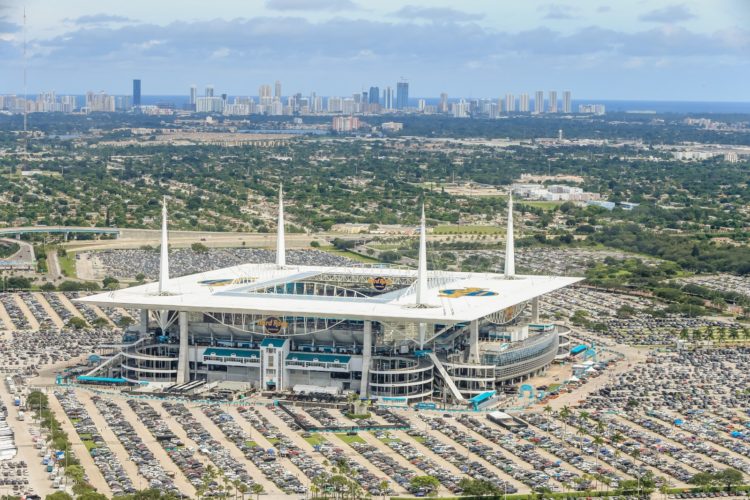 Organisers of Formula 1’s Miami Grand Prix say they want to “blow people away” with the facility that will be used to host the new-for-2022 event.

Formula 1 has finalised a 10-year agreement to bring the championship to Miami and the circuit will be located around the Hard Rock Stadium, in Miami Gardens.

The Hard Rock Stadium is used by the Miami Dolphins NFL team and has held the Super Bowl on six occasions, most recently in 2020, while the Miami Open tennis tournament moved to the facility in 2019.

The 19-turn circuit, which is set to join the calendar in the second quarter of 2022, will wind its way around the complex, with the pit straight set to run adjacent to the stadium.

“If you look at what we did with the Miami Open for example, what we’re going to be able to do, is it is going to be completely transformed into a campus, with landscaping, and all kinds of different opportunities,” said Miami Grand Prix Managing Partner Tom Garfinkel.

“We want to create an environment where people are blown away when they get there.

“I think, starting with sort of a blank sheet of paper, [we have been able] to design a circuit with the designers – and Formula 1 and the FIA – that has a lot of passing opportunities.

“There’s going to be vistas, really, from the stadium, which sits at the centre of the circuit, [where] you can walk around the top deck of the stadium and see every turn on the race track, I think that’s a pretty unique opportunity.

“I think the infrastructure we have in place, the club spaces, the things we can take advantage of in and around the campus, it’s going to be beautiful.”

The project has been several years in the making, with Miami initially earmarked as a potential destination in 2017, but Garfinkel believes the delay will only serve to enhance the event.

“I think we have a vision to create a global entertainment destination,” he said.

“The site exists to bring in the biggest events in the world, with the Super Bowl, the National Championship game, international soccer, Miami Open tennis and really there is no bigger event in the world than Formula 1 racing.

“So this is something we have worked on for a while and, frankly, while maybe it took a long time, if you look at the amount of diligence that goes into it, taking the time to listen to the community, putting that diligence through a global pandemic we have all been dealing with, it actually wasn’t a long time when you put it in perspective.

“Sometimes you just will things to happen and when you have great partners you are able to get that accomplished.”

The initial ambition was for Formula 1 to race in downtown Miami but these proposals were shelved in favour of the new location at the Hard Rock Stadium.

Garfinkel believes focusing the event at the complex, rather than downtown, will assist the championship in the long run.

“For me I think that in some ways it’s going to be a lot better in certain respects,” said Garfinkel, who is also the Vice Chairman, CEO and President of the Miami Dolphins and Hard Rock Stadium.

“When we originally looked at the city design, you have a lot of constraints around a race track.

“When we looked at the Hard Rock site we had basically a blank sheet of paper to work with.

“And secondly, [we will] be able to put on great experiences that are uniquely reflective of the diversity of Miami and everything we do.

“And again, having existing infrastructure there, having things in place, we think we’re in a better position to be able to do that.”