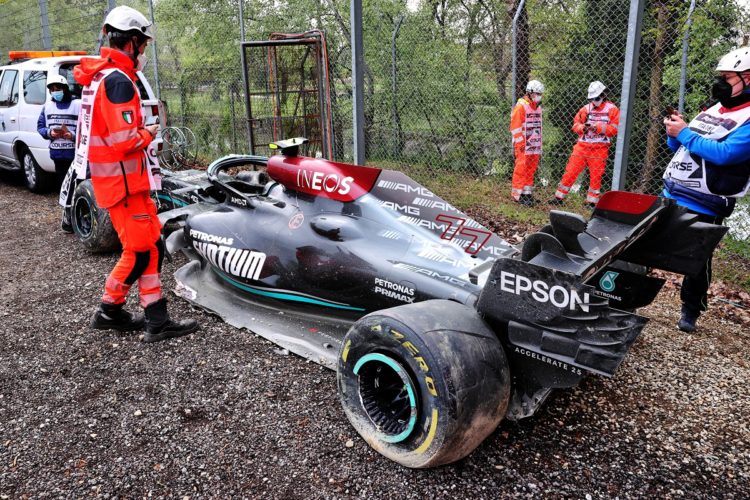 The pair collided in a high-speed incident as they battled for ninth place into Turn 2, with both sustaining heavy car damage in the accident.

Following the collision, Russell pinned the blame on Bottas, while the Finn pointed the finger at the Williams driver. Both drivers visited the stewards after the race, who took no further action.

While Wolff affirmed that Bottas should not have been competing as low as he was in the running order, the Austrian says Russell should’ve reconsidered his overtaking manoeuvre on a drying circuit.

“There is never such a situation in life where one is 100 per cent to blame and the other zero,” Wolff said.

“The whole situation should have never happened, Valtteri had [a] bad first 30 laps and should have never been there, but George should never have launched into this manoeuvre considering that the track was drying up – it meant taking risk and the other car in front of him was [a] Mercedes.

“Any driver development, any young driver, you must never lose this global perspective. Lots to learn for him, I guess.

“You need to see that there is a Mercedes and it’s wet, so there is a certain risk to overtake and the odds are against him anyway when the track is drying up.

With Russell in the frame for a seat at the front-running Mercedes team for 2021, the Briton suggested that Bottas would not have tried the same defence on another driver on the grid.

However, Wolff does not believe that’s the case: “That’s bullshit. The whole situation is absolutely not amusing for us, to be honest,” he said.

“It’s quite a big shunt. Our car is a write-off and in a cost-cap environment that is certainly not what we needed and it’s probably going to limit the upgrades that we are able to do.