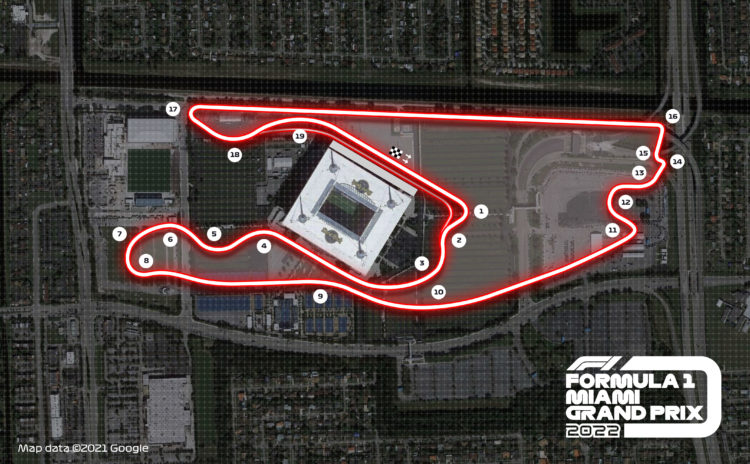 Formula 1 has announced that a 10-year deal has been concluded to bring the championship to Miami, starting in 2022.

A 5.41km circuit, featuring 19 corners, will be created adjacent to the Hard Rock Stadium, alongside which the start/finish line will be placed.

The new event will join the calendar at a yet-to-be-determined date in 2022.

“We are thrilled to announce that Formula 1 will be racing in Miami beginning in 2022,” said Formula 1 CEO Stefano Domenicali.

“The US is a key growth market for us, and we are greatly encouraged by our growing reach in the US which will be further supported by this exciting second race.

“We will be working closely with the team from Hard Rock Stadium and the FIA to ensure the circuit delivers sensational racing but also leaves a positive and lasting contribution for the people in the local community.

“We are grateful to our fans, the Miami Gardens elected officials and the local tourism industry for their patience and support throughout this process.

“We are looking forward to bringing the greatest racing spectacle on the planet to Miami for the first time in our sport’s history.”

Formula 1’s commercial rights holder Liberty Media has long sought to add a second event in the United States, with Miami having emerged as its leading candidate.

A principal agreement was reached as far back as 2018, with the intention for the streets of downtown Miami to welcome Formula 1 in 2019, but those plans ultimately fell through.

A new location was established at the Hard Rock Stadium, owned by Miami Dolphins chief Stephen Ross, who is the Chairman and Owner of the Miami Grand Prix.

But the proposed event faced opposition from local residents while the pandemic also pushed back its initial target date of 2021.

On Wednesday Miami Gardens city councillors approved a resolution concerning concessions made by the promoter, including funding for STEM programmes and local businesses, track sessions outside of school hours, while ensuring the circuit will not utilise public streets.

The circuit will be located around the Hard Rock Stadium, in Miami Gardens, which is approximately 15 miles north of downtown Miami.

It is set to be the second event in the country, with the Circuit of the Americas, located near Austin, Texas, having held the United States Grand Prix since 2012.

Formula 1 has not raced in Florida since 1959, when Sebring hosted the season finale, the sole time the circuit held a grand prix.

It is the latest non-pandemic new event added to the Formula 1 schedule, with Saudi Arabia due to debut this December, and the Netherlands returning after a 36-year absence.