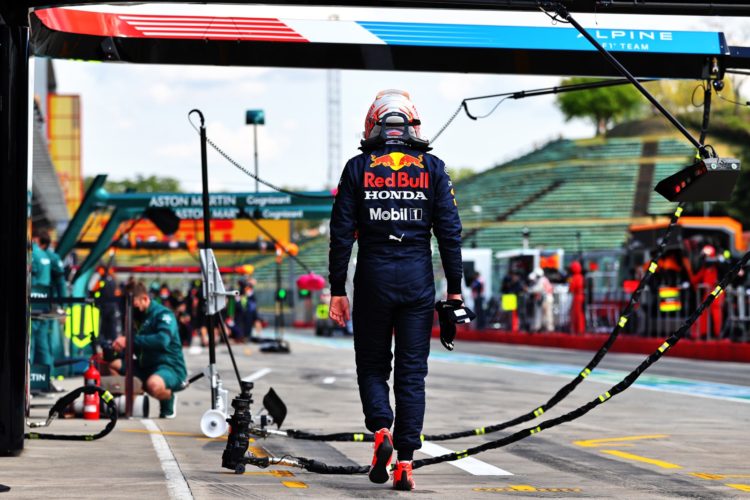 Max Verstappen conceded that he is playing catch-up at the Emilia Romagna Grand Prix after a driveshaft issue truncated his running on Friday.

Verstappen finished third, within a tenth of Mercedes driver Valtteri Bottas, in the opening one-hour session at Imola, but managed only four laps in second practice.

Verstappen’s RB16B suffered a driveshaft failure as he rounded the final corner and he came to a halt at pit exit.

It left Verstappen without substantial representative running from the session.

“[I am] a little bit [behind] but you know what you have to do anyway so it should be alright,” said an unconcerned Verstappen.

“We just have to focus on ourselves to do a better job and then we’ll see where we will end up compared to [Mercedes].”

Verstappen’s issue meant Red Bull’s programme was carried out by team-mate Sergio Perez, with the Mexican classifying in sixth position.

“Every lap that I do I really learn a few tricks here and there,” said Perez.

“Overall, more performance to be gained tomorrow… which I think we know where to find it and hopefully we can be much higher up for qualifying because the race pace seems to be strong.

“We are just chasing different things around here compared to Bahrain. I guess the track conditions are very different, just learning how the car behaves in different types of conditions.”

Perez’s day was also partly compromised by a clash with Alpine’s Esteban Ocon in the first session.

Technical issues meant drivers were without radio communication, with the incident also missed by TV cameras, but Perez played down the situation.

“We didn’t have radio so I think that was a miscommunication there,” he said.

“I thought Esteban was slower than he was and I misjudged going into the apex, but he got just a bad timing from myself.”