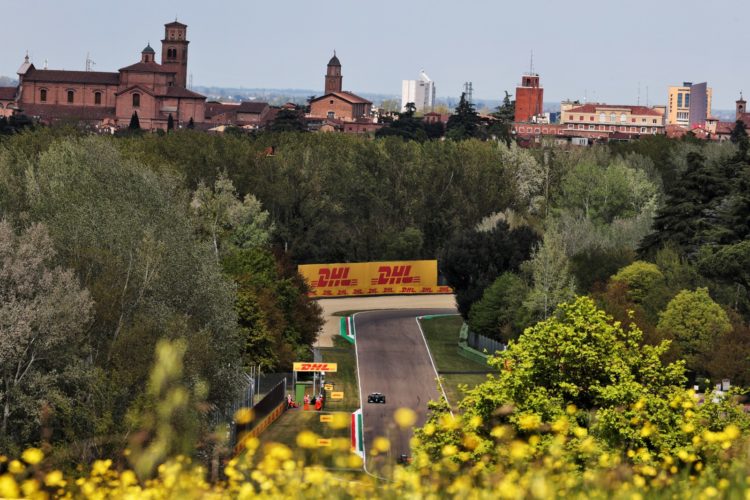 Valtteri Bottas again headed a Mercedes 1-2 as Max Verstappen’s preparations for the Emilia Romagna Grand Prix were dealt a blow during second practice.

Bottas set the session’s benchmark of 1:15.551 at Imola on the yellow-banded Medium tyre prior to the Mercedes drivers switching to Softs, as per the usual protocol.

Neither Bottas nor Lewis Hamilton improved on their previous best on their first Soft push runs but found time on the second push lap after a cool-down lap.

Verstappen swept all three practice sessions in Bahrain, prior to taking pole position, but his build-up at Imola has been less smooth.

Verstappen, who was a close third to the Mercedes drivers in the first session, completed just four laps in the second session when his RB16B suffered an issue as he exited the final turn.

Verstappen cruised to a halt and stopped the car at pit exit, ending his involvement in the session, and denying him any meaningful running.

Fifth spot through 13th was covered by just half a second, acting as another indicator of how close the midfield group could be come qualifying.

But two drivers pulled clear of the pack, with Pierre Gasly underlining the speed of the AlphaTauri AT02 by placing third, displaying strong pace on both the Soft and Medium tyres.

Gasly, whose AlphaTauri team is based at nearby Faenza, secured the team’s best dry-weather qualifying result at Imola last October when he took fourth on the grid.

Carlos Sainz finished a couple of tenths further back in fourth but still had more than half a second in hand over fifth-placed Ferrari team-mate Charles Leclerc, who brought the session to an early end with a crash.

The one-hour session was winding towards its conclusion when Leclerc gave his mechanics some additional evening work when he hit the wall at the final corner.

As drivers carried out longer runs Leclerc tried to catch a slide through Rivazza 2 but upon correcting it the SF-21 slid into the wall, causing damage to the right-front of the car.

Leclerc had briefly set the pace in the session, clocking a Mercedes-beating time of 1:15.367s, but the lap was erased after he exceeded the limit exiting Piratella.

Sergio Perez classified sixth for Red Bull, in front of AlphaTauri’s Yuki Tsunoda and the lead McLaren of Lando Norris, with the team having a quieter day after heading the midfield group in Bahrain.

Antonio Giovinazzi and Nicholas Latifi both provided encouragement for their respective Alfa Romeo and Williams teams, which have spent time towards the back in recent years.

Giovinazzi classified ninth in the session while Latifi was 12th, putting the Canadian – yet to score a point – in front of the likes of Alpine’s Fernando Alonso and Aston Martin’s Sebastian Vettel.

Daniel Ricciardo, down in 18th spot, was a victim of having his best time deleted for track limits, partly explaining his relative lack of speed.

Haas brought up the rear, albeit with Mick Schumacher clinging to the rear of the midfield, half a second clear of team-mate Nikita Mazepin.