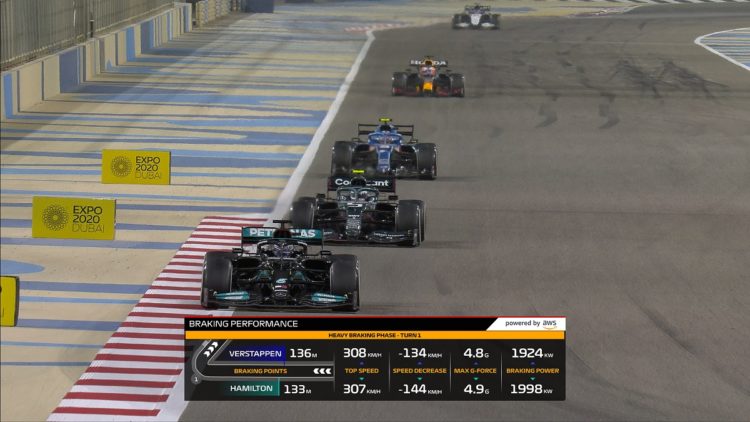 Formula 1 and Amazon Web Services (AWS) will unveil six new infographics throughout the 2021 season to bolster the audience’s viewing experience from home.

For 2021, six new graphics will be rolled out, which use real time data to provide fans with in-depth information during the live session.

The first new graphic, called Braking Performance, will be unveiled at Imola this weekend and will show “how a driver’s braking style during a cornering manoeuvre can deliver an advantage coming out of the corner”.

Key metrics such as top speed on approach, speed decrease through braking, the braking power (KWH) utilised, and the immense G-forces drivers undergo while cornering will be outlined.

Later in the year, new visuals will be created, with Car Exploitation being scheduled for use in Canada, which will display when drivers “are pushing their cars to performance limits in areas like tyre traction, braking, acceleration, and manoeuvring during key points in a race”.

Energy Usage will debut at the British Grand Prix and will outline how the Power Units use energy during a race, including periods when teams unleash energy to overtake another car.

Start Analysis, which will be introduced at the Italian Grand Prix, will display “which driver was the quickest on the pedal and picked the perfect line, as well as which drivers struggled off the starting grid and why”.

Pitlane Performance will look at pit stop execution, analysing the efficiency of the stop and providing data that goes beyond how long a driver was stationary in their pit box – the graphic will first be seen in Japan.

Finally, Undercut Threat will add a new layer of insight to the Pit Strategy Battle graphic that was used last year, as it analyses race performance before either car has pitted, visualising data on gaps between cars, average pit loss time, and tyre performance “to help identify which cars are at risk.”

“F1 Insights Powered by AWS give fans an insider’s view of how car, driver, and team function together so that they can better appreciate the action on the track,” said Rob Smedley, chief engineer of F1.

“With this new set of racing statistics for 2021, we are going deeper than ever before. New Insights like Braking Performance and Undercut Threat peel back additional layers of race strategies and performance and use advanced visualizations to make the sport of racing even more understandable and exciting.

“Race car technology improves all the time, and thanks to AWS, our fans can appreciate how that technology impacts race outcomes.”