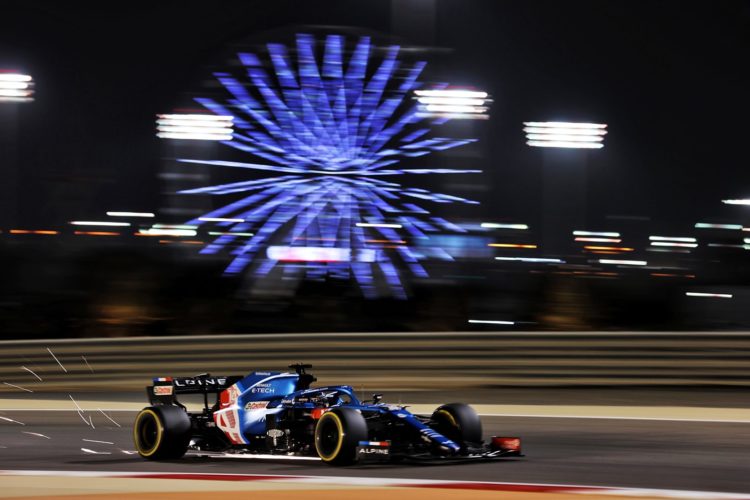 Fernando Alonso’s return in Bahrain was truncated by a brake issue, caused by rising temperatures inflicted by an errant sandwich bag, but the Spaniard was buoyed by his display despite accepting he “was not ay my 100 per cent.”

Alonso had expected to take time to get up to speed after two years away from the grid; he has kept sharp in WEC, the Indy 500 and Dakar but this was a return to frantic Formula 1 action in a fiercely-contested midfield for the first time since November 2018.

Alonso put the Alpine A521 ninth on the grid and was encouraged by the pace while cautious that he had benefited from some issues elsewhere. Alpine team-mate Esteban Ocon was hamstrung by yellow flags while the ostensibly faster Sergio Perez and Yuki Tsunoda proved unable to escape Q2 on Mediums. It was nonetheless a good result after a best of 15th across the trio of practice sessions and suggested that Alonso had exceeded expectations.

“I think these cars on low fuel and new tyres, they are really extreme in terms of performance,” said Alonso after qualifying. “You have to really trust the car and believe that you can go that fast, and it was a very nice feeling, an enjoyable feeling.

“It’s nice to see we can be in the top 10. At the same time there were some cars behind us that tried to qualify Medium and they were not into Q3, so there are some fast cars behind us as well and we are very close. You can be eighth, ninth or 14th in one tenth and a half, so that’s something we will need to fight every weekend probably.”

Alonso gained a spot on the opening lap of the race at the expense of compatriot Carlos Sainz and moved into seventh when Pierre Gasly lost his front wing by tagging Daniel Ricciardo.

That proved the high point in terms of position but Alonso was in the thick of several fights towards the lower reaches of the top 10 when rising brake temperatures, caused by the debris, prompted his exit.

“It was nice to feel again the adrenaline at the starting grid, the national anthem, all these procedures were very emotional today for me,” Alonso said, appearing refreshed and upbeat compared to the at-times frustrated figure of 2018.

“Even the pit stops, I think the guys did an amazing job but my position for the second pit stop was not right. Just small things and small mistakes that I keep doing from testing and this first race. Hopefully by race two, race three, I can perform better personally.”

Drawing a definitive picture of the midfield remains tricky, particularly given the limited data available – with Esteban Ocon’s weekend hampered by his qualifying setback and shunt with Sebastian Vettel – but Alonso expressed hope over Alpine’s prospects.

“I think it’s going to be very, very close in the midfield,” he said. “A couple of weekends are going to be better for some teams, maybe the next weekend you have a better layout for different teams than the week before.

“I think we will be in that mix and I’m optimistic that we can have a good season, especially at some weekends I’m sure it will play into our favour.

“I was happy to race so close to the McLarens in the first stint, in front of one Ferrari and behind the other one and I felt competitive in that group. If I see [in qualifying], Leclerc was six-tenths in front of us but [in the race] we were in that mix in the first stint. So I think there are positives to take from the race and I think we have to be confident that we will have some good weekends.”

Alonso was nonetheless quick to emphasise that Bahrain was merely step one of what will be at the minimum a two-year project.

“Alpine is in F1 for big things, maybe we knew that this 2021 was a continuation of 2020 and we are building the momentum and something hopefully more important into 2022. So you know, as I said, I hope you will enjoy this comeback.”