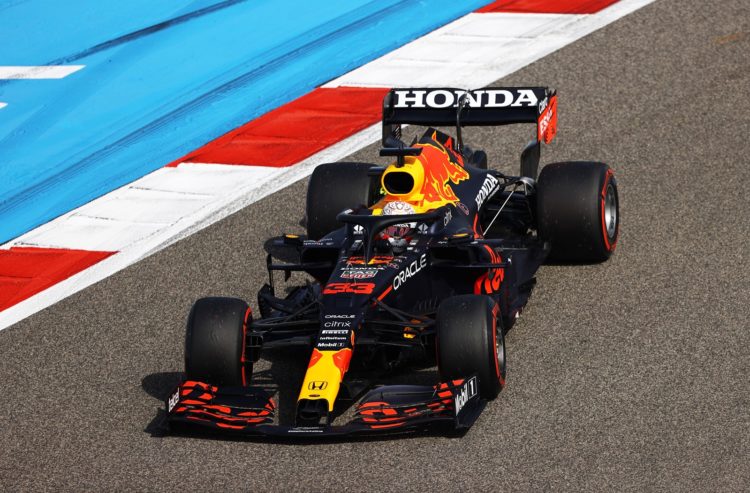 BAHRAIN, BAHRAIN - MARCH 26: Max Verstappen of the Netherlands driving the (33) Red Bull Racing RB16B Honda on track during practice ahead of the F1 Grand Prix of Bahrain at Bahrain International Circuit on March 26, 2021 in Bahrain, Bahrain. (Photo by Bryn Lennon/Getty Images) // Getty Images / Red Bull Content Pool // SI202103260584 // Usage for editorial use only //

Max Verstappen clocked the fastest time during the opening practice session of the 2021 Formula 1 season in Bahrain.

Red Bull Racing driver Verstappen set the fastest time during testing and remained atop the timesheets as all 20 cars took to the circuit for the first time.

The opening one-hour session is typically one of the least representative of the season, owing to hot and sunny conditions, with qualifying and the race taking place in the evening.

Verstappen’s benchmark time of 1:31.394s was almost three seconds down on the best effort he clocked during pre-season testing at the same circuit on March 14.

The 23-year-old nonetheless finished with a comfortable buffer of 0.298s back to Mercedes’ Valtteri Bottas.

Norris spends time atop the table

Lando Norris provided McLaren with some optimism as he briefly fronted the session, prior to being shuffled down by Verstappen and Bottas.

Sakhir Grand Prix victor Sergio Perez was sixth on his first practice outing for Red Bull, and the quickest of the drivers who have changed teams.

At a venue where drivers carried out pre-season testing, and two grands prix last autumn, there was little in the way of mistakes and setbacks for teams.

Aston Martin and Alpine both had low-key sessions, with none of its representatives in the top 10, as Sebastian Vettel took 12th and the returning Fernando Alonso only 16th.

Williams and Haas occupied up their anticipated positions at the rear of the field, with Mick Schumacher getting the better of team-mate Nikita Mazepin.