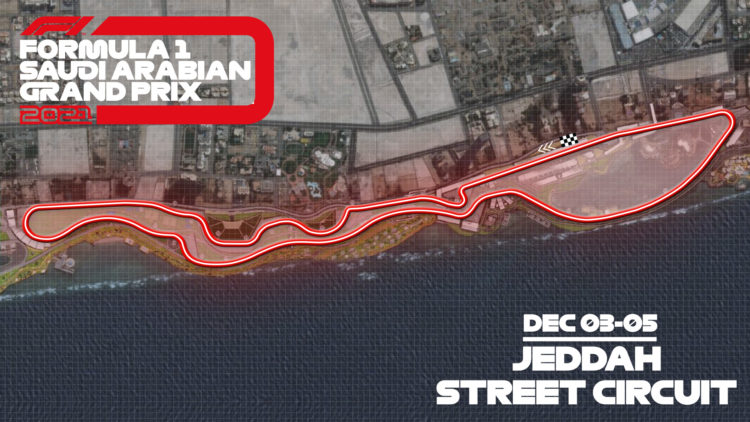 Organisers of the inaugural Saudi Arabian Grand Prix have revealed the layout of its Formula 1 circuit, which will feature 27 corners, and be second in length only to Spa.

The Jeddah City Circuit, located on the corniche area on the Red Sea, to the north of the city centre, is set to be among the fastest circuits on the schedule, with an estimated average speed of 250km/h across its 6.175km duration.

It will play host to Formula 1 from December 3 to 5 as the penultimate event of the 23-round campaign and will take place at night.

The circuit layout was designed in conjunction between Hermann Tilke’s company and the Formula 1 Motorsport group.

It is expected that three DRS zones will feature on the circuit.

“We have worked very closely with the team at Tilke and with the promoter to ensure we have a track that provides exciting wheel-to-wheel racing for our fans and challenges all of the drivers.

“The design brings out the best of a modern street circuit but also has fast paced free flowing areas that will create fast speeds and overtaking opportunities.

“The setting is incredible, on the Red Sea, and we can’t wait to see the cars on the track in December.”

Saudi Arabia has a long-term deal to host a Formula 1 grand prix though it is expected that the event could move to the Qiddiya sports and entertainment facility, currently under construction on the outskirts of capital Riyadh, potentially from 2023.