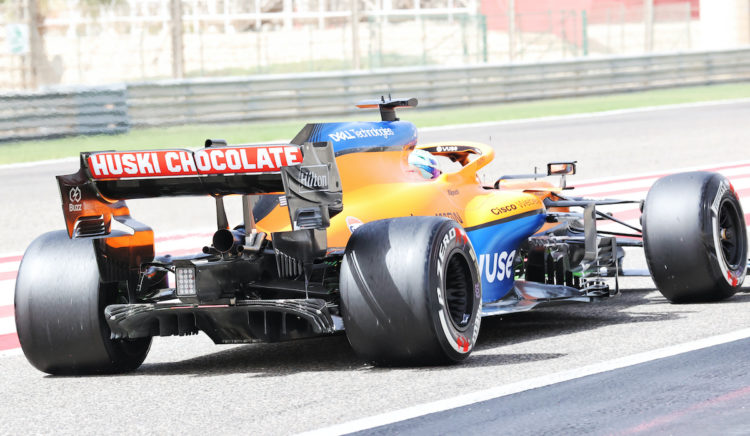 McLaren looks to have found a loophole in the 2021 Formula 1 regulations which govern the diffuser, with their development raising a few eyebrows amongst rival teams in the paddock.

McLaren were careful to hide the diffuser on the MCL35M revealed to the world a fortnight ago, but with testing commencing in Bahrain this weekend, the cars were finally unwrapped to reveal their true form.

The diffuser on the MCL35M was immediately an area of interest as it appears to break the regulations which govern the length of the strakes at the rear of the car.

New rules were introduced for this season in a bid to reduce downforce by 10 per cent. The FIA mandated changes to the floor, rear brake ducts and diffuser. That included shortening the strakes by 50mm.

The diffuser is a key aerodynamic component and one that is heavily developed as it can bring about huge gains in performance – just look back to 2009 and the double diffuser saga which helped underdogs Brawn GP to secure the title that year.

The diffuser expands the airflow coming from the floor to effectively create a vacuum, which sucks the rear of the car onto the track surface. The strakes then manage the airflow, guiding it to where it needs to go and cleaning it up to carefully reintegrate it with higher-pressure ambient air, reducing turbulence and drag.

McLaren’s MCL35M manages to have two strakes that are clearly longer than the rules permit (see above image). The blue dashed line shows where the regulations permit the length of the strakes, but by attaching them to the centre of the floor, which has been lengthened, McLaren has found a loophole in the rules.

You can see below how the floor is slightly further forward on both the Mercedes W12 and Red Bull RB16B, with its strakes completely detached and remaining within the regulations.

Only time will tell whether a) McLaren’s solution brings performance and will therefore be copied, or b) is banned by the FIA for contravening the rules.