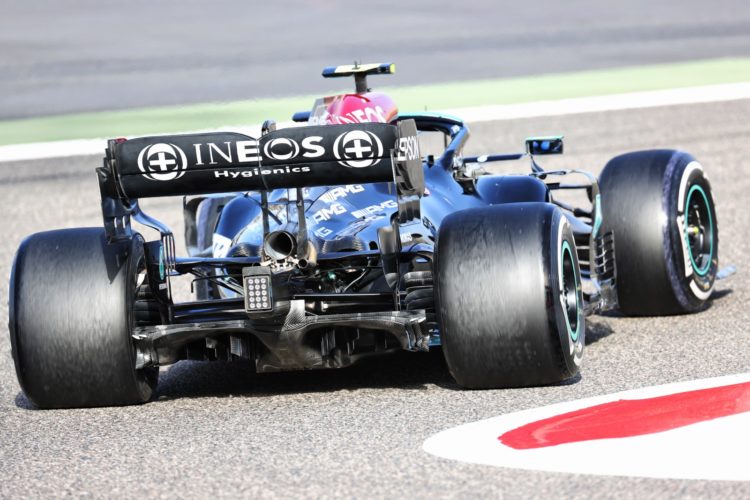 Valtteri Bottas put Mercedes on top of the timesheets on the second day of Formula 1 testing in Bahrain, with six teams covered by six-tenths of a second.

The benchmark changed several times during the latter half of the afternoon session as teams utilised the optimum track conditions once dusk fell.

Bottas, who drove after the lunch break, wound up quickest, setting a time of 1:30.289s, using Pirelli’s C5 tyres – the softest of its dry-weather range.

McLaren’s Lando Norris, Alfa Romeo’s Antonio Giovinazzi and Ferrari’s Charles Leclerc completed a top six split by as many tenths of a second.

Morning trouble for Hamilton and Vettel

Lewis Hamilton and Sebastian Vettel have 11 titles between them but they had little fortune during the four-hour session in the morning.

Hamilton spun off through Turn 13, beaching the W12 in the gravel, though was soon able to continue his and Mercedes’ programme once the car was returned to the garage.

He conceded afterwards that he was still struggling with the rear of the car and had yet to identify its sweet spot, with the situation accentuated by the gusty conditions on Saturday.

Vettel, meanwhile, amassed only 10 laps – none of them truly representative – owing to a gearbox problem that stranded the AMR21 for much of the morning.

Productive days and some issues

Only Aston Martin failed to pass a century of laps, with Haas in particular productive, as Nikita Mazepin and Mick Schumacher combining to amass 162 laps of the season-opening venue.

Williams’ Nicholas Latifi had two spins but wound up seventh on his sole pre-season day in the FW43B while Sergio Perez got his first taste of Red Bull’s RB16B.

Perez suffered the most dramatic moment of the afternoon session when the left-hand-side of his engine bodywork detached as he pulled out of the slipstream to pass Latifi.

The debris caused a red flag though Perez was able to recover the car to the pit lane for repairs.

Morning pacesetter Daniel Ricciardo fell to ninth by the close of play while Fernando Alonso returned to Formula 1 action with Alpine and rounded out the top 10.

The final day of pre-season testing will begin at 10:00 local time on Sunday.