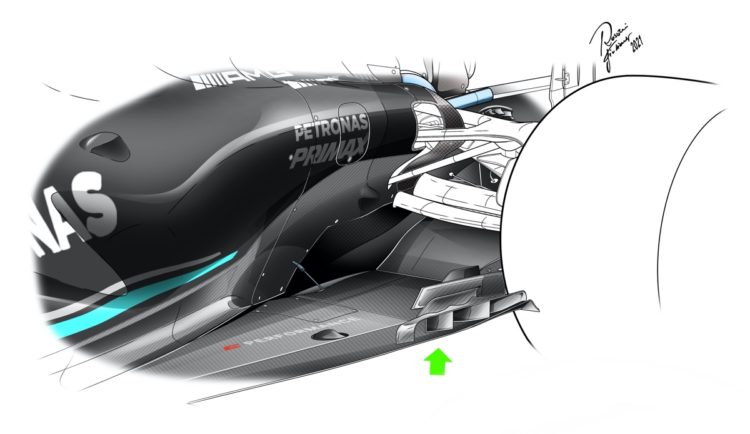 The real Mercedes W12 was finally presented in Bahrain for the three days of testing in its final form, and we were able to appreciate the real technical innovations of the reigning world champions single-seater, after the launch renderings concealed important components such as the new floor and diffuser.

The first day of testing for Toto Wolff’s team, however, couldn’t have been much worse. A gearbox problem saw Valtteri Bottas complete just seven laps, whilst a sandstorm meant Lewis Hamilton’s running was also hit. The decision not to carry out a filming day turned out to be quite unfortunate, as it may have alerted the team to the gearbox problem much earlier.

Despite its poor Friday, Mercedes still made positive headlines with the technical details of the W12, especially with regards the floor, which was finally out in plain sight for the eyes of their rivals.

The terminal part of the floor is not as simple as that of the renderings of the presentation, it has a series of drifts connected to each other by a horizontal element, which have the purpose of throwing air towards the outside of the wheel tread. It is also noted how in the area before the diffuser there are three “fins” that comb the air-flow, this time in the innermost area of the wheel. We can see in the drawing the terminal area of the floor of the Mercedes W12.

More curious is the anterior area of the floor, which has a wave shaped element in the area where the diagonal cut begins at 1800mm from the front axle. Mercedes have clearly worked hard over the winter to try to recover the lost downforce due to the new regulations, which effectively limit the available downforce provided by the flat floor.

The sinuous trend of the edge helps the flows to move to an area outside the car, creating vortices of air that create an aerodynamic barrier that turns the airflow outside the rear wheel, effectively reducing the tyres resistance (drag).

We have also seen a fairly similar solution on the new Aston Martin AMR21, which has undergone a transformation compared to the car that ran last week during a filming day. It follows the same technical philosophy as the Mercedes W12 – which may not come as a huge surprise.

On the Aston Martin however, the wavy element is further forward, closer to the bargeboards and before the diagonal cut of the floor.

Moving to the rear of the W12 we were finally able to see a 2021-spec diffuser following the rule changes which mandate 50mm shorter fins. However James Allison and his team have worked hard on every detail, precisely to reduce the negative impact that the new regulations have on aerodynamics.

We have highlighted in the photo the drift of the innermost diffuser, which has been divided into many elements.

Ignore the large piece of fencing on the rear of the car, which is a measurement device made up of many pitot tubes, which measure the pressure and speed of the air flow to identify the aerodynamic behaviour at the rear of the car.