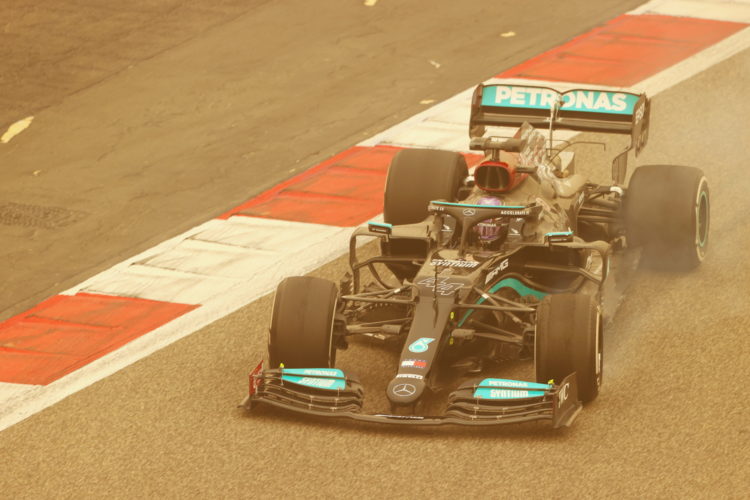 Lewis Hamilton says Mercedes has “no choice but to take the positives” in the wake of its slowest start to pre-season testing in eight years, amid a gearbox issue, and tweaks to his seating position.

Mercedes completed only 48 laps across eight hours of running at the Bahrain International Circuit, having lost almost all the morning session due to a gearbox problem, effectively wrecking Valtteri Bottas’ programme.

Hamilton, who ran in the afternoon session, had several off-track excursions and moments aboard the W12 and finished 2.2s slower than Red Bull’s Max Verstappen.

It marked Mercedes’ least productive opening day of testing since 2014.

Mercedes’ trackside engineering chief Andrew Shovlin accepted it had been a “poor start to the season” and that the team did not have the W12 “in the right balance window.”

Shovlin added that “while we made some progress during the day we’re not happy with how the car is performing and it is pretty clear we have some work to do.”

Hamilton, chasing a record-breaking eighth world title, stressed that Mercedes has to search for the positives off the back of an atypically troubled day.

“It definitely wasn’t the cleanest of days that we’ve had but these things are sent to try us,” he said.

“Everyone has worked extremely hard to get us here. We had that mishap in the morning which was very unfortunate for Valtteri in terms of losing time on track and the team is working hard to try and understand what that was. I think they did a great job to turn the car around.

“The second session wasn’t without its challenges, but we exist to find solutions to the problems that we’re faced with. We just had a good debrief and we’ll keep working away.

“We have no choice but to take the positives. I remember in 2007 during testing I had 10 days in the car and now it’s getting less and less.

“We only have a day and a half in the car before the first race, with different tyres and different aero modifications so it’s not easy but it’s the same for everyone. I’d like to think my nine years’ experience with this team will help me get the best out of it.

“We’re quite a way behind on our test programme and need to find a bit of balance and speed but we have two days left and every opportunity to recover the situation.”

Hamilton also revealed that part of the delay during the afternoon was upon realising a pre-season decision to tweak his seating position had backfired.

“I made some quite big changes to the ergonomics of my seat just to try something different,” he said.

“It felt like it was a good idea when I set it up at the factory but driving a lap it was horrible! So I immediately got out of the car, and changed things back to where they were.

“My seat position has been pretty much the same since 2013, they’ve hardly had to change it, give or take a couple of movements, but [we’re] always just looking to see how we can gain a bit more in terms of comfort, getting it optimised, but I think it already was [before 2021].”