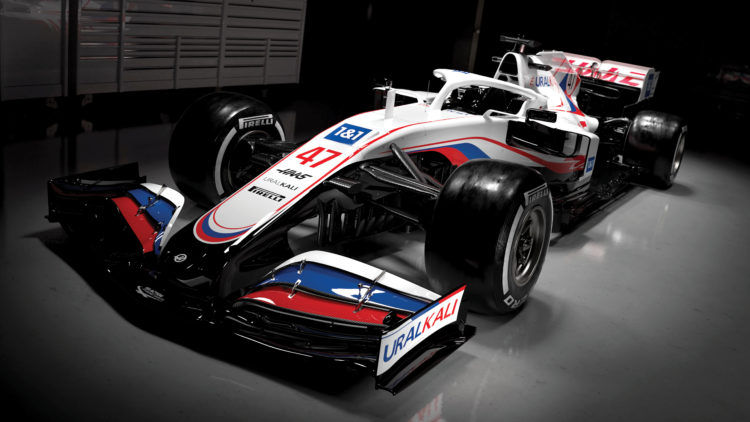 Haas has become the latest team to display its 2021 car, the VF-21, as the squad braces for a challenging Formula 1 campaign.

It has signed Uralkali, the potash fertiliser company controlled by Nikita Mazepin’s father Dmitry, as its new title partner.

Haas joined Formula 1 in 2016, vaulting to fifth in the standings in a breakout 2018 campaign, but it regressed through 2019 amid difficulties developing its car.

Haas’ struggles continued through the 2020 season as it opted not to bring developments to its car due to financial concerns and long-term uncertainty when the pandemic struck.

Experienced drivers Romain Grosjean and Kevin Magnussen combined to score just three points, breaking into the top 10 at only two grands prix, as Haas placed a lowly ninth in the standings.

The squad is braced for another year spent towards the rear of the pack after opting to focus the bulk of its limited resources on 2022, when Formula 1 will introduce overhauled regulations.

It is not expected to develop the VF-21 after the opening round in Bahrain while the car itself will not be fired up until next week’s test in the Gulf state.

Haas will enter 2021 with a refreshed driver line-up after recruiting rookies Mick Schumacher and Mazepin on respective multi-year deals.

Schumacher, son of seven-time World Champion Michael, claimed the Formula 3 title in 2018 and followed it up with the Formula 2 championship in 2020.

Mazepin has been affiliated with Formula 1 since 2016, having acted as Force India’s test driver, prior to sampling Mercedes machinery in 2019.

“We look forward to representing their brand throughout the season. It’s an exciting time for the team with Uralkali coming onboard and having Nikita and Mick driving for us.

“It’s definitely a case of all change but I’m hoping that we get back to being in the mix for scoring some points at these races. It’s been a tough couple of seasons, but we’ve also got our eye on the bigger picture, in particular 2022 and the implementation of the new regulations.”