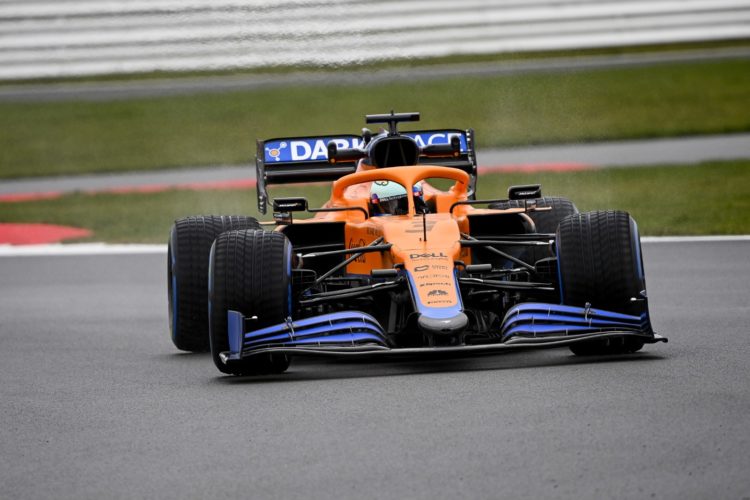 Daniel Ricciardo had his first taste of McLaren Formula 1 machinery as part of a filming day at a wet Silverstone on Tuesday.

Ricciardo has joined McLaren on a three-year deal in the wake of previous spells at HRT, Toro Rosso, Red Bull and Renault.

McLaren unveiled its Mercedes-powered MCL35M at its Technology Centre on Monday evening with Ricciardo appearing in team colours for the first time.

The MCL35M was taken straight to British Grand Prix venue Silverstone in preparation for a filming day on Tuesday.

Under Formula 1 regulations teams are permitted to run current-spec cars outside of official sessions for two nominated filming days.

Running is limited to only 100km while promotional tyres must be used.

Lando Norris, entering his third season with McLaren, gave the MCL35M its first runs on Tuesday morning at a Silverstone soaked by heavy and persistent rainfall.

Ricciardo took over behind the wheel of the MCL35 after lunch for his inaugural run with McLaren.

Ricciardo has spent the last few weeks in the United Kingdom, which is currently under lockdown, in order to get up to speed with his new team.

“I’ve already had so many meetings at the MTC with not only my engineer, but really the whole racing department,” said Ricciardo on Monday.

“So it’s kind of like, feeling like you’re sitting in the room with a voice and with enough knowledge that what you say will be taken onboard.

“I think that whole integration into all areas of the race team, that’s probably got a lot more power than just being the driver, and only the driver.

“So that feeling, feeling like you can sit in every room and have a presence, that’s probably the most important [aspect of moving to a new team], but also the most difficult thing to get going.”

Pre-season testing is due to begin in Bahrain on March 12.