In photos: McLaren-Mercedes, the first time around 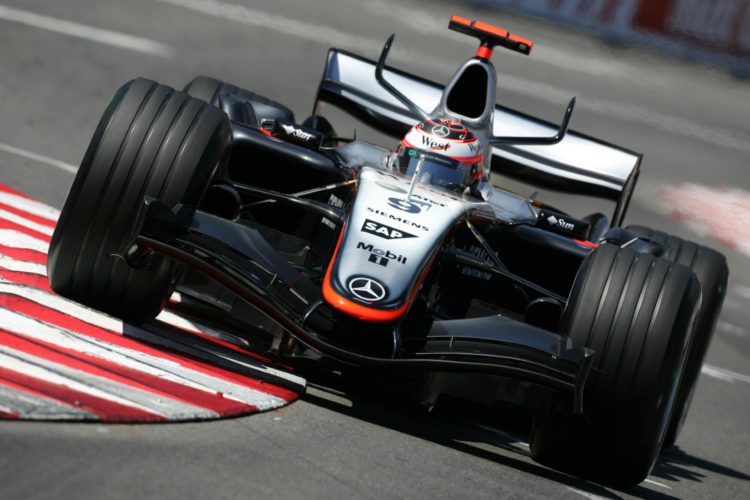 McLaren will unveil its MCL35M on Monday, the first car of its new chapter with Mercedes, following spells with Honda and Renault. MotorsportWeek.com looks back at the previous 20-year partnership between the operations.

Mercedes was McLaren’s fourth engine partner in as many years after the conclusion of its Honda deal, short-term Ford contract, and dismal Peugeot alliance. The MP4/10 was a firm midfielder, requiring a handful of sizeable update packages, though Mika Hakkinen scored a pair of podiums in the first Mercedes-powered McLaren. McLaren finished fourth overall but the season was marred by Hakkinen’s serious practice crash in Australia and Nigel Mansell’s disastrous two-race stint.

Hakkinen recovered from his Australia crash to make a full-time return while David Coulthard switched from Williams. McLaren was a more competitive force but still often lacked overall speed compared to runaway title winners Williams, as well as Ferrari and Benetton. McLaren again finished fourth, albeit with an improved return of six podiums, four from Hakkinen and two courtesy of Coulthard.

McLaren traded its iconic red-and-white Marlboro scheme for the West-inspired livery that would become its identity for almost a decade and immediately the new ‘Silver Arrows’ were a success. Coulthard won in Australia for McLaren’s first win since 1993 and triumphed again in Italy, but further victories were lost through poor reliability, particularly hampering Hakkinen. He finally grabbed a maiden win at the Jerez finale, in a co-ordinated finish, as McLaren again placed fourth overall.

McLaren identified revised regulations, including narrower cars and grooved tyres, and the recruitment of Adrian Newey, as its golden chance. The MP4/13 emerged as the fastest car on the grid, aided by Mercedes’ pure grunt, and Hakkinen spearheaded the team’s charge. Hakkinen held off Ferrari’s Michael Schumacher for his maiden Drivers’ crown while McLaren took 12 poles and nine wins from 16 races to capture the Constructors’ title. Remarkably it would be McLaren-Mercedes’ only title.

McLaren remained a front-runner in 1999 but reliability and driver errors proved costly, with Hakkinen suffering five retirements while in a prime position for victory. Hakkinen resisted Eddie Irvine to take a second Drivers’ title but McLaren relinquished its crown to Ferrari, with Coulthard’s charge blunted by seven retirements from 16 starts.

The 2000 season proved the high watermark in the battle between McLaren and Ferrari, with Hakkinen and Schumacher embarking on an epic fight for the title. But on both fronts McLaren came off second-best: Hakkinen lost out to Schumacher while Ferrari retained its Constructors’ crown.

As Ferrari and Schumacher entered its dominant era McLaren had to be more concerned with the threat from the new Williams-BMW partnership. A fading Hakkinen, drained by his title fights, still picked up two wins – with a third denied by a last-lap failure in Spain – while Coulthard added another pair of victories. McLaren again finished second in the standings with Coulthard this time classifying runner-up to Schumacher.

McLaren recruited Kimi Raikkonen in place of compatriot Hakkinen but the squad bagged just a sole win in 2002, courtesy of Coulthard in Monaco, and slipped to third. It wound up using a development version, dubbed the MP4-17D in 2003, though after two wins from two it slipped away from contention and did not triumph again. Raikkonen valiantly took the title to the final round, but missed out to Schumacher, as McLaren placed third once more.

McLaren’s MP4-18 was due to be its 2003 car but the decision to design a radical package ultimately backfired. It suffered a spate of overheating issues, was initially unable to pass the mandatory crash tests, and when it was driven it was woefully unreliable. Tester Alex Wurz suffered an enormous crash at Paul Ricard and with the project suffering setback after setback the car was abandoned and never raced.

McLaren amalgamated some of the failed MP4-18 into the 2004 car, the MP4-19, and initially there were problems. The car not only lacked pace but was desperately unreliable, with Raikkonen scoring just one point in seven races, famously exiting in fiery fashion in Bahrain. A mid-season update, dubbed the MP4-19B, transformed McLaren’s prospects. Raikkonen took victory in Belgium and fronted the team’s recovery to fifth overall as Coulthard exited.

McLaren produced the horned MP4-20 and while it was rapid, especially in the hands of Raikkonen, a slow start and unreliability proved costly. McLaren, having struggled early on, stormed to 10 wins from the last 15 races – though Raikkonen retired from the lead on two more occasions while Juan Pablo Montoya also had setbacks. Raikkonen matched Fernando Alonso for wins, but missed out on the title, while McLaren’s victory tally was higher than Renault’s – but the French marque claimed that honour too to end Ferrari’s supreme streak. The team also lost Newey to Red Bull Racing.

For the first time McLaren’s relationship with Mercedes no longer involved Ilmor while West exited and Emirates entered, bringing the splashes of red and chrome that defined the next chapter. The MP4-21 was not a bad package but it lacked the overall performance of title challengers Ferrari and Renault. Raikkonen, Montoya and the Colombian’s replacement Pedro de la Rosa took nine podiums but McLaren finished a season win-less for the first time in a decade.

The year was set to be McLaren’s return to the front but instead it sowed the seeds for its eventual divorce from Mercedes. World Champion Alonso joined, partnered by rookie Lewis Hamilton, and the MP4-22 – now decked with the additional Vodafone red – was a match for Ferrari’s F2007. But the team’s prospects disintegrated amid the intra-team battle and the Spygate saga. McLaren took eight wins but was disqualified from the Constructors’ standings – having scored enough points to place first – and fined $100m. Alonso left. Mercedes was deeply unimpressed.

Alonso was replaced by Heikki Kovalainen and McLaren, still competing under a dark cloud following Spygate, was once more a front-runner. Hamilton, de facto number one, took five wins and beat Felipe Massa to the crown in one of Formula 1’s all-time last-round classics. Kovalainen added another win but while Hamilton took individual honours McLaren had to accept second-best to Ferrari in the Constructors’ Championship.

McLaren failed to grasp new aerodynamic regulations and began the year with one of the least competitive packages on the grid. But mid-season development catapulted the team into contention and Hamilton took two wins as McLaren jumped to third in the standings. Off-track Mercedes wanted its own works team and thus acquired the title-winning Brawn outfit to rebrand for 2010, putting the McLaren-Mercedes axis in doubt for the first time in 15 years.

McLaren recruited Button to partner Hamilton – forming an all-champion line-up – though in pure pace was adrift of Red Bull. The duo nonetheless combined to score five wins, with Hamilton mathematically in contention for the title until the last race, as McLaren finished second in the standings, some way ahead of the rebuilding factory Mercedes team.

The MP4-26, best remembered for its radical L-shaped sidepods, was some way behind Red Bull’s RB7, which was a potent force in the hands of defending champion Vettel. McLaren still managed to take six victories, three apiece for its drivers, and once more classified third in the standings.

This proved one of the biggest missed seasons of the latter McLaren-Mercedes era. In an unpredictable year McLaren was among the front-runners with the MP4-27 but through a spate of setbacks, mid-season development issues and reliability woes it dropped to third overall, despite taking seven wins. Hamilton, seeking a fresh challenge, left for Mercedes, which claimed its first victory since its return.

Hamilton’s exit coincided with the fortunes of Mercedes and McLaren diverging. Button and Sergio Perez finished every race – the first team to do so in history – but reliability was not matched by performance. The MP4-28 was an unremarkable car and McLaren struggled to extract the potential it believed was present. The team did not take a single podium and regressed to fifth in the standings.

McLaren had already pledged its future to Honda and so by 2014 it had dropped in Mercedes’ hierarchy. The MP4-29, sporting an all-silver livery after Vodafone’s exit, started life strongly with a double podium but its fortunes soon waned. Mercedes swept up as F1’s hybrid era kicked into life but McLaren was only fifth, two spots behind fellow customer Williams. McLaren signed off from Mercedes and embarked on a new relationship with Honda hoping to fight for world titles…