by Rosario Giuliana
A A
5 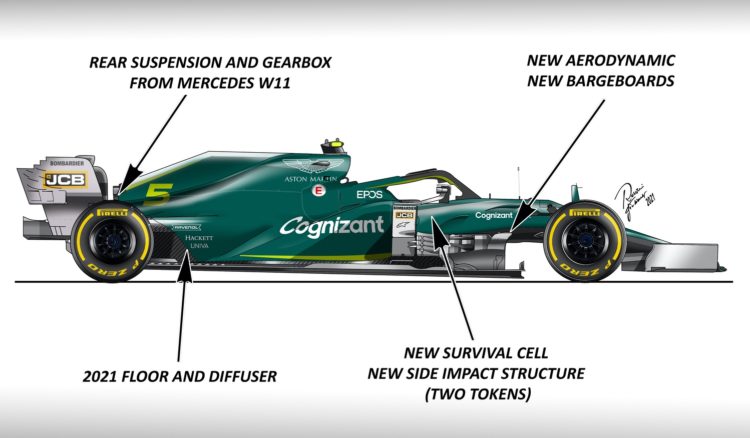 Aston Martin will soon unveil their 2021 challenger – the first to bear the famous marque’s name since 1960 (Red Bull’s sponsor deal aside) – and we’ll finally see just how closely it resembles the Mercedes W11 from last year.

Due to the development freeze imposed by the FIA, the Aston Martin which will be driven by Sebastian Vettel and Lance Stroll, will largely be an updated Racing Point RP20, with mostly macroscopic differences on the aerodynamics.

The team caused a stir last season when it unveiled its car, with the RP20 sharing a tremendous similarity to the Mercedes W10 from 2019, leading to the coining of the term ‘Tracing Point’.

Although Racing Point were sanctioned by the FIA – docked 15 championship points and fined €400,000 – for copying Mercedes’ rear brake ducts, much of what it did was completely legal and it’s therefore likely they will attempt to do the same again to some degree.

The team’s technical chief Andrew Green has never hidden the fact that their 2021 car will use the Mercedes W11 as a reference for development. There’s sensible logic to that as the car, in addition to the Mercedes Power Unit, will also run the same gearbox and rear suspension as the W11.

Under the rules, it can do this without having to spend its token allocation. This is because the gearbox and suspension components have already been approved last year on the W11. The decision in this regard was taken by mutual agreement between the teams, in order to avoid teams like Racing Point/Aston Martin running what would essentially be a two year old car.

Although Aston’s Green recently said their car would not be a simple “copy and paste” of the W11 this year, instead having its own identity, the fact it is running what is essentially the same rear-end, means it’s unavoidable that it will share the same aerodynamic philosophy.

The new Aston Martin will certainly have the rear-suspension lower triangle arm which, with the external fairing, will recreate a sort of double diffuser. The choice to have the Mercedes suspension is therefore not purely for mechanical reasons, but also for aerodynamic advantages.

In the illustration below we observe what was the layout of the rear suspension of the Mercedes W11, with the lower triangle that is planted on the deformable structure, in a more rearward position than the classic pattern with arm attachments to the gearbox.

Tokens Spent on a New Chassis

Having already decided in May the direction of the development of the Racing Point RP20 with a view to 2021, the Silverstone team spent its two tokens granted by the FIA ​​on modifying the survival cell for aerodynamic purposes.

The homologation of the new survival cell required the passing of a new crash test, and only concerns the part of the chassis that is after section B-B. Specifically, the goal of the Aston Martin engineers was to move the side impact structure lower, under the air intake of the radiators.

Last year’s Racing Point, following what had been the concept of the Mercedes W10, remained the only team with the old style side vents, with the anti-intrusion cone still above the radiator vents.

This technical philosophy was first introduced by Ferrari in 2017, perfected aerodynamically by Red Bull in 2018, and subsequently copied by all teams in the years to come. Even Mercedes, with last year’s W11, had adopted the Ferrari matrix solution on its car for the first time. In aerodynamic terms, this solution allows the radiator outlets to be moved higher, so as to increase the space along the sidepods for the passage of air.

In anticipation of this change, the technicians of the former Racing Point, introduced in Mugello an important update package regarding the cooling intakes and sides: at the Tuscan GP on the homologation deadline, a series of aerodynamic modifications along the sides were seen, together with the homologation of a new arrangement of the radiant masses.

To recreate that sort of twin-plane wing along the radiator outlets, Racing Point had modified the sidepods taking inspiration from the Mercedes W11 solution. While remaining with the old layout of the side impact structure, Green’s engineers modified the aerodynamic part of the air intakes, with a hybrid solution between that of the W11 and the W10.

These modifications, available at Mugello on Stroll’s car only, had been accompanied by an extreme overhaul of the bodywork of the sidepods, which accompanied the silhouette of the new radiators in a sloping manner.

The new sidepods, clearly designed for the 2021 car, recreated a sort of chute for the flow of air that flows along the top of the car, accompanying it to the floor and extractor area. A solution more similar to what was seen on the Williams than the Mercedes W11.

Aerodynamic work continued during the winter, and the new Aston Martin may have some differences from last year’s W11, precisely because of the different management of the flows along the sides.

The aerodynamic parts of the front end will be almost identical with regards the nose and front wing, especially in the first period after the presentation. More important developments will immediately take place in the area of ​​the barge boards, which will be modified in a consequential manner to what has been the choice of managing the flows of the side part of the car.

The side flow deflectors will not be a copy of the Mercedes, as it was with the Racing Point RP20 and the W10. This is because of the regulation change that specifies that the floor must be cut diagonally, therefore teams will have to complete their own research into the best way of recovering the loss of downforce in that area, with the bargeboards likely to be the key to that.