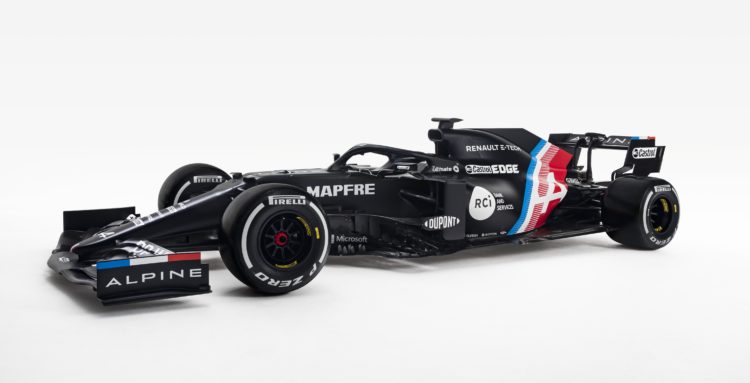 Alpine’s new CEO says regular Formula 1 podiums must be its ambition after an interim winter livery was unveiled on Thursday.

The interim livery was displayed as part of Groupe Renault’s strategic relaunch, dubbed ‘Renaulution’ with Alpine positioned as the ‘Avant-Garde’ division of the company.

The temporary black livery is a tribute to the A500 F1 prototype from 1975.

Alpine has been tasked by Renault CEO Luca de Meo with being profitable by 2025 while the brand has also signed a memorandum of understanding to produce a next-generation EV sports car in conjunction with Lotus.

A launch event is due to take place next month at which the definitive livery for its Formula 1 car, named the A521, will be unveiled by Fernando Alonso and Esteban Ocon.

A new management structure will be in place this year following the surprise exit of Team Principal Cyril Abiteboul.

Abiteboul had been expected to stay on in a redefined position but Renault announced his departure from the company on Monday, with Laurent Rossi installed as Alpine’s new CEO.

Current Formula 1 Executive Director Marcin Budkowski, who led Renault at a handful of grands prix in 2020 when Abiteboul was not on location, is poised to step up as Team Principal.

Ex-Suzuki chief Davide Brivio has been linked to a senior management role.

“We renewed our full commitment and will enter the new regulations era in 2022 with the objective of consistently contending for podiums,” said Rossi.

“’21 will be a transition year for us, like all teams, but the climb towards the summit has already begun.”

The company returned to Formula 1 full-time in 2016 and last year secured three podiums – its first in the current era – to finish fifth in the championship.

The predominantly black livery is set to be altered when Alpine’s 2021 project is fully launched.

“Some of the structural graphic elements will remain on the racing livery while others will change.”