Button reveals he ‘almost’ signed for Ferrari in 2013 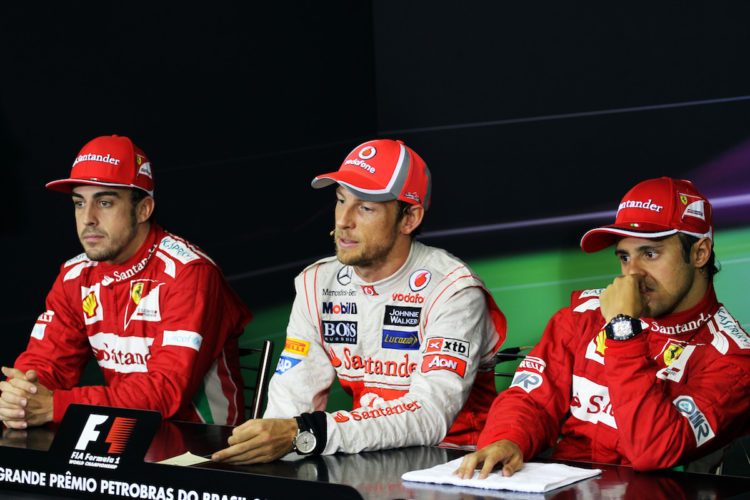 Jenson Button has revealed that he almost made a switch to Ferrari for the 2013 Formula 1 season before opting to remain at McLaren.

Button spent the last seven years of his F1 career with McLaren, following on from his title-winning season with Brawn, in 2009.

The Briton was paired with compatriot Lewis Hamilton for three years at the Woking-based team before Hamilton decided to leave and join Mercedes in 2013.

At the same period, Button admits that a switch to Ferrari was a real possibility for him before he committed to McLaren, which he believes was the correct choice.

“Every driver would love to race for Ferrari at some point,” Button said in an interview with Motorsport News.

“There’s just something about that team, even this year [2020] it’s tough for them and tough for motorsport fans to see them where they are, but maybe they needed this to come back stronger.

“But I would love to have raced for Ferrari and there was a good possibility sort of eight years ago but it just didn’t materialise at the end.

“Pretty much contracts were ready to go and it almost happened, but for many different reasons it didn’t and, to be fair, I was probably better off where I was anyway at McLaren.”

Ferrari fielded two-time World Champion Fernando Alonso and Brazilian Felipe Massa in 2013, with the latter signing a one-year extension in 2012 before departing to Williams in 2014.

If Button had made the switch to Ferrari, it is likely he would have paired up with Alonso, who became his team-mate for two years at McLaren in 2015 and 2016.

After announcing his full-time F1 departure at the end of 2016, Button made his final F1 appearance at the 2017 Monaco Grand Prix, standing in for Alonso at McLaren as the Spaniard made his Indianapolis 500 debut in the United States.