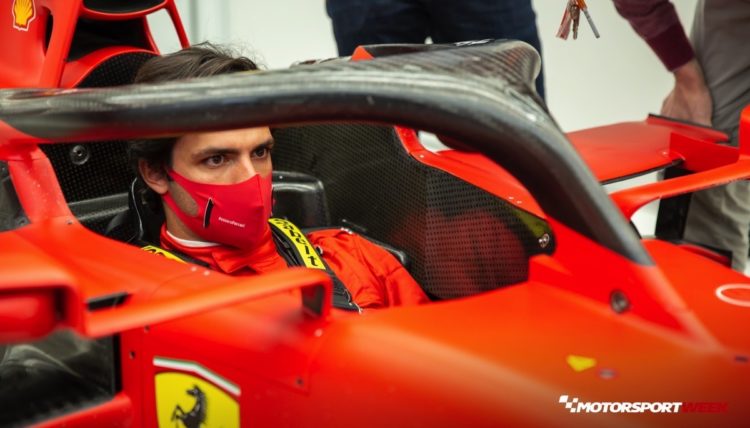 Carlos Sainz travelled to Italy on Friday for his first day as a Ferrari driver, following the conclusion of the 2020 Formula 1 season.

The Spaniard will partner Charles Leclerc at the Scuderia next year and ahead of the Christmas break, he spent his first day in the famous red overalls to familiarise himself with his new home.

Sainz underwent a seat fitting in a 2018 chassis, which he will get to drive around Ferrari’s Fiorano track as part of a test programme to familiarise himself with how the team and car operate – which is particularly important this year given pre-season testing has been cut to just three days, or 1.5 days per driver.

Speaking to media from Ferrari’s Maranello factory, Sainz described it as a day he’ll “never forget”.

“It’s the first time in red, which is obviously, as you can imagine, pretty special,” he is quoted as saying by Autosport. “It’s a special day for me in general. And it’s probably a day I will never forget.

Ferrari team boss Mattia Binotto meanwhile took the time to reassure Sainz that he will receive equal treatment and that they won’t be operating a ‘number 1’ policy with any driver at the start of the year.

“There is nothing written in the contract of Charles being the [team] leader,” insisted Binotto. “I think that the two will be free to fight on track.

“I think it’s important that they are not damaging themselves, that is clear, but I think that they will have equal opportunity, certainly at the start of the season.”