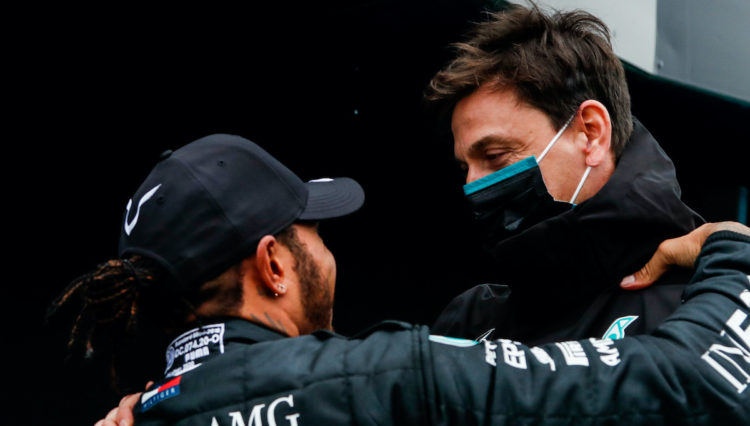 Mercedes team boss Toto Wolff isn’t setting a date for the team to conclude contract talks with Lewis Hamilton, but says it must be done before pre-season testing ahead of the 2021 Formula 1 season.

On Thursday Mercedes teased that a new contract would be announced on Friday, with many expecting it to be between Hamilton and the team, however it turned out to be a new deal with Wolff, who will remain team principal through 2023.

That deal also included investment from sponsor INEOS, which has taken a 33.3 per cent shareholding in the team, which has been matched by Wolff, with Mercedes’ share dropping to a third.

Speaking to the BBC on Friday, Wolff said there was no rush to finalise Hamilton’s new deal, although it is highly likely to go through in the coming weeks with a deadline of late-February.

“We are not worried about eventually getting it done,” said Wolff. “We are not putting a special date to it because we don’t want to be under pressure.

“Sooner or later it needs to be done and at the latest before we go testing.”

Hamilton has always been keen to see Wolff remain in his position before signing a deal of his own and the Austrian sees no reason for the seven-time World Champion not to continue with Mercedes.

“We had such a successful run of championships in the past seven years there is no reason not to continue. He is on the top of his game and will be for a while, and that’s why continuing together is a no-brainer.”

INEOS owner Sir Jim Ratcliffe hailed Hamilton’s skill, adding: “Lewis is either the greatest, or one of the two or three greatest ever racing drivers. There is absolutely no question about that; he’s just got immense talent. And he is a very likeable chap because I’ve got to know him a little bit.

“The one thing I would say about Lewis is there has been no diminution of his skills. He clearly is absolutely at the top of his game, despite the fact he is 35.”