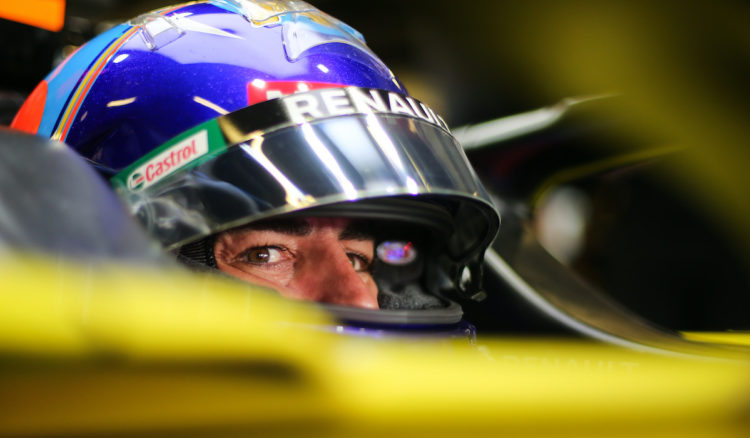 Fernando Alonso says his competitive spirit has somewhat been “ignited” after testing Renault’s RS.20 in Abu Dhabi this week.

The Spaniard has been out of Formula 1 for two years after he left McLaren to focus on the Indy 500, WEC and the Dakar, but signed a deal to return to the same team – albeit under the Alpine brand – he won two World Championships with back in 2005 and 2006.

He got his first official taste of current F1 machinery this week when he was granted permission to take part in the ‘Young Driver Test’, following the conclusion of the 2020 season.

Alonso topped the session, posting a time of 1:36.333, which would have seen him qualify ahead of both Renault drivers based on their best qualifying times from the weekend – albeit on a track that has since been rubbered in.

“It was good and very nice to be back in the car especially with the race team,” commented the 39-year-old. “I’ve been testing the 2018 car in preparation but this one felt a bit more serious and it ignited a little bit the competitive spirit.

“It was great to feel the modern cars and experience what they can do. I was watching the team’s progress at the weekend closely and it was nice to experience what I learnt from the outside and then inside the cockpit today.

“We signed off lots of basic things we did in preparation at the factory like seat fitting, pedal position and so on, which is beneficial with only one and a half days of winter testing next year. We ticked boxes today and we go into Christmas and New Year with good spirit and everyone motivated in the team.”

Zhou managed 98 laps, just shy of Alonso’s 105, and was over 1.5 seconds adrift, but was happy with how he and the team performed.

“It was a pretty decent day. I got used to the car straight away, we did a lot of laps including race runs and performance runs, which were very interesting. Our pace was reasonably stable, so I was happy with that, especially this morning’s performance run.

“There were a couple of technical things here and there, but it is testing, we still did a lot of laps, and that is the main purpose. I wasn’t really looking for lap time and during the last two sessions, together with the team, we found a good balance on the car in comparison to the evening sessions at the weekend, so that’s positive learning for the team.

“Overall, I’m really happy with my first time driving the 2020 car, so thanks to Renault for the opportunity.”