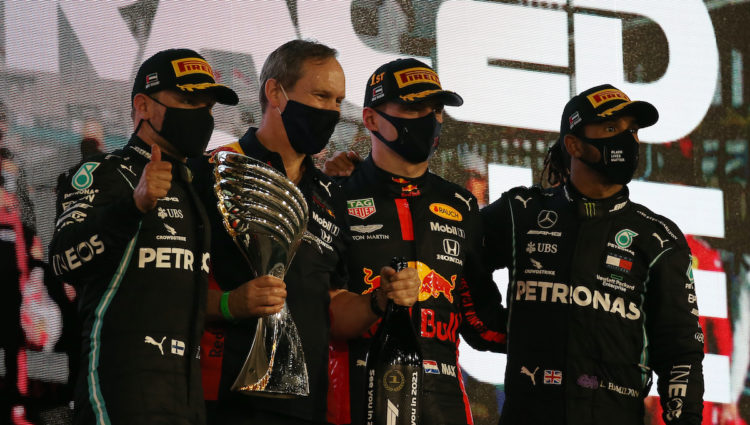 Max Verstappen dominated the Abu Dhabi Grand Prix to take his and Red Bull’s second race victory of the 2020 campaign.

The Dutchman held the lead on the opening lap of the race and didn’t come under pressure from the Mercedes’ behind, who turned down the power units in both cars to protect an MGU-K “gremlin”.

Valtteri Bottas was able to keep himself ahead of Lewis Hamilton throughout the 55 laps, with the latter returning after missing last weekend’s Sakhir Grand Prix due to a Covid-19 diagnosis.

Alexander Albon crossed the line in fourth place, having maintained position in the opening stages, before passing Lando Norris on lap six.

Despite making headway into the gap to Hamilton in the final laps, the Thai-British driver couldn’t get past had to settle for the first spot off the podium.

With the battle for third in the Constructors’ Championship raging closely all year, McLaren ended the fight on top following strong results from Lando Norris and Carlos Sainz.

After slipping behind Albon, Norris held onto fifth spot for the rest of the grand prix, and stayed ahead of team-mate Carlos Sainz who claimed sixth.

Racing Point’s hopes of third in the standings were hurt when Sergio Perez retired with a mechanical issue early on, which saw most of the field peel into the pits for their one and only pit stop of the race when a Safety Car was called to recover the stricken RP20.

With the Silverstone-based team’s hopes resting on Lance Stroll, the Canadian driver couldn’t make his way through the pack and ended up in tenth place, getting overtaken by Esteban Ocon on the final lap.

Daniel Ricciardo, who pitted for the first time late in the grand prix after going long on the Hard tyres, was seventh, ahead of AlphaTauri’s Pierre Gasly and team-mate Ocon in ninth.

Ferrari once again fails to score

For the fifth time in 2020, Ferrari walked away from a grand prix with zero points in its back pocket, after Charles Leclerc and Sebastian Vettel came home in 13th and 14th respectively.

Both drivers stayed out when the Safety Car was called, and dropped towards the back of the field when they both pitted later in the race.

Although they were able to make up positions, both drivers failed to come close to breaking into the top ten.

George Russell, on his return to Williams, was 15th, heading Antonio Giovinazzi and team-mate Nicholas Latifi.